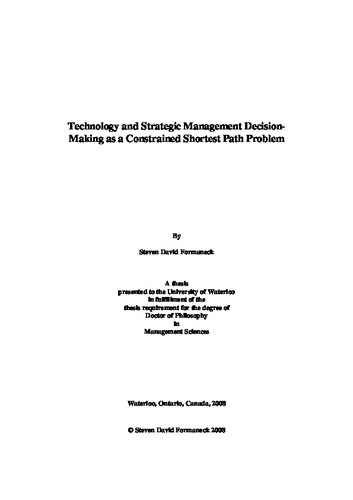 A constrained shortest path algorithm is developed and implemented in Matlab to optimize the management decision-making process, which is a potential tool for managers. An empirical analysis is performed using Statistics Canada’s Workplace and Employee Survey (WES), which consists of variables relating to employers and their employees, conducted from years 1999 through 2004, inclusively. Specifically, the research explores the relationships among variables such as innovation, technology use, training and human resource management and its effect on the success of the firm in terms of profit and labor productivity. The results are compared to the current literature in technology and organizational management. In general, it is discovered that optimal management strategies are highly dependent upon the performance in which the firm operates. Additionally, the constrained shortest path algorithm developed for the thesis is tested against other leading methods in the literature and is found to be quite competitive. The tests are run on randomly generated constrained shortest path problems of varying degrees of complexity with the algorithm performing well on all levels.