Occupational Prestige of Canadian Professions in the New Economy 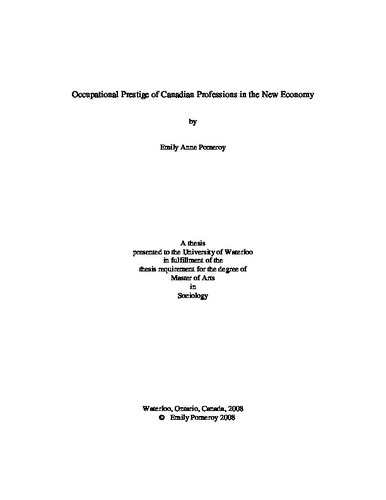 Canadian professions have, paradoxically, lost prestige at least in a relative sense, despite being the prototype for the expanding new economy. The early 1990s saw a transition from the old economy to a new economy emphasizing a highly educated and knowledge-focused workforce that values flexibility, innovation and risk. Professions exemplify the knowledge-intensive and education-centered traits emerging in the new economy particularly well. This research examines factors that influenced changes in the prestige ratings of professions during the 40-year period between 1965 and 2005. Occupational prestige and census data collected in 2005 are used to measure the impact of changes in education, income, and the gender composition of professions on the prestige levels. Abbott’s “professional purity” thesis is also used to examine the effects of people-complex versus data-complex practices on prestige ratings. The influence of rater characteristics is also examined in terms of prestige allocation to professions. Finally, using a lawyer survey, the prestige associated with areas within the legal profession is examined in a study of internal stratification. Professions experienced a relative gain in occupational prestige over this 40 year period; however, professions did not gain as much in comparison to all occupations. In predicting 2005 occupational prestige between 1965 and 2005, the change in income, data and people-complex tasks, gender of incumbents, and the gender of the rater all impact the prestige that professions receive. Women’s increase in numerical representation within professions increases the 2005 prestige ratings of professions. In predicting 2005 prestige, female raters attributed significantly more and male respondents attributed significantly less prestige to professions. Gender significantly predicted the level of law an individual practiced and the distribution of gender across specializations also suggests that the legal specializations where many women work are less prestigious than men’s specializations.