Hardness results and approximation algorithms for some problems on graphs 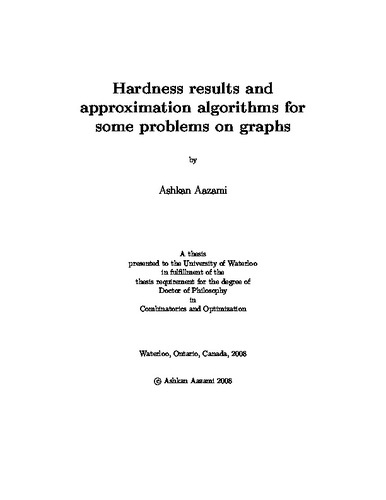 This thesis has two parts. In the first part, we study some graph covering problems with a non-local covering rule that allows a "remote" node to be covered by repeatedly applying the covering rule. In the second part, we provide some results on the packing of Steiner trees. In the Propagation problem we are given a graph $G$ and the goal is to find a minimum-sized set of nodes $S$ that covers all of the nodes, where a node $v$ is covered if (1) $v$ is in $S$, or (2) $v$ has a neighbor $u$ such that $u$ and all of its neighbors except $v$ are covered. Rule (2) is called the propagation rule, and it is applied iteratively. Throughout, we use $n$ to denote the number of nodes in the input graph. We prove that the path-width parameter is a lower bound for the optimal value. We show that the Propagation problem is NP-hard in planar weighted graphs. We prove that it is NP-hard to approximate the optimal value to within a factor of $2^{\log^{1-\epsilon}{n}}$ in weighted (general) graphs. The second problem that we study is the Power Dominating Set problem. This problem has two covering rules. The first rule is the same as the domination rule as in the Dominating Set problem, and the second rule is the same propagation rule as in the Propagation problem. We show that it is hard to approximate the optimal value to within a factor of $2^{\log^{1-\epsilon}{n}}$ in general graphs. We design and analyze an approximation algorithm with a performance guarantee of $O(\sqrt{n})$ on planar graphs. We formulate a common generalization of the above two problems called the General Propagation problem. We reformulate this general problem as an orientation problem, and based on this reformulation we design a dynamic programming algorithm. The algorithm runs in linear time when the graph has tree-width $O(1)$. Motivated by applications, we introduce a restricted version of the problem that we call the $\ell$-round General Propagation problem. We give a PTAS for the $\ell$-round General Propagation problem on planar graphs, for small values of $\ell$. Our dynamic programming algorithms and the PTAS can be extended to other problems in networks with similar propagation rules. As an example we discuss the extension of our results to the Target Set Selection problem in the threshold model of the diffusion processes. In the second part of the thesis, we focus on the Steiner Tree Packing problem. In this problem, we are given a graph $G$ and a subset of terminal nodes $R\subseteq V(G)$. The goal in this problem is to find a maximum cardinality set of disjoint trees that each spans $R$, that is, each of the trees should contain all terminal nodes. In the edge-disjoint version of this problem, the trees have to be edge disjoint. In the element-disjoint version, the trees have to be node disjoint on non-terminal nodes and edge-disjoint on edges adjacent to terminals. We show that both problems are NP-hard when there are only $3$ terminals. Our main focus is on planar instances of these problems. We show that the edge-disjoint version of the problem is NP-hard even in planar graphs with $3$ terminals on the same face of the embedding. Next, we design an algorithm that achieves an approximation guarantee of $\frac{1}{2}-\frac{1}{k}$, given a planar graph that is $k$ element-connected on the terminals; in fact, given such a graph the algorithm returns $k/2-1$ element-disjoint Steiner trees. Using this algorithm we get an approximation algorithm with guarantee of (almost) $4$ for the edge-disjoint version of the problem in planar graphs. We also show that the natural LP relaxation of the edge-disjoint Steiner Tree Packing problem has an integrality ratio of $2-\epsilon$ in planar graphs.