Brave New World: The Correlation of Social Order and the Process of Literary Translation 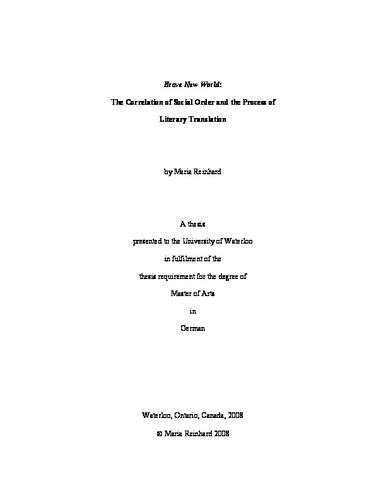 This comparative analysis of four different German-language versions of Aldous Huxley’s Brave New World (1932) shows the correlation between political and socio-cultural circumstances, as well as ideological differences, and translations of the novel. The first German translation was created by Herberth E. Herlitschka in 1932, entitled Welt – Wohin? Two further versions of it were released in 1950 and 1981. In 1978, the East German publisher Das Neue Berlin published a new translation created by Eva Walch, entitled Schöne neue Welt. My thesis focuses on the first translations by both Herlitschka and Walch, but takes into account the others as well. The methodological basis is Heidemarie Salevsky’s tripartite model. With its focus on author and work, commissioning institution and translator, it was developed as a tool to determine the factors influencing the process of literary translation. Within this framework, the translations are contextualized within the cultural and political circumstances of the Weimar and German Democratic Republics, including an historical overview of the two main publishers, Insel and Das Neue Berlin. With reference to letters between Herlitschka and his publisher Anton Kippenberg at the Insel Verlag, secured from the Goethe und Schiller Archiv (Stiftung Weimarer Klassik), titles and subtitles as paratextual elements of the Herlitschka versions are examined. An overview of Lawrence Venuti’s and Hans Vermeer’s approaches to the notions of domesticating and foreignizing provides further theoretical tools to assess the translations. Venuti rejects the technique of domesticating translation as, in his opinion, it constitutes an act of violence against the source language, which is contrast with Vermeer’s perspective, according to which the alternatives are equivalent. In Vermeer’s opinion, both the domesticating as well as the foreignizing translation do not destroy the source culture. Another fundamental theoretical principle is Otto Kade’s claim that the affiliation of a translator to a certain social system and identification with a certain ideology are evident in his or her work. The thesis includes a study of the afterwords in the East German versions, which display an intent to create distance between the society of the novel and that of the translator. These paratexts function as a tool for censorship and at the same time as a means to circumvent it. Chapters 1-4 and 16 is selected for intensive analysis. It becomes obvious that the different socio-political situations influence the outcome of the translations. One of the most striking differences between them, Herlitschka’s translocation of the original setting, is identified as a parodistic device. An analysis of the themes of gender, race and sexuality further answers what kinds of factors influenced the process of literary translation, what kinds of modifications appear and what causes them. Herlitschka’s work displays a tendency to intensify traces of misogyny and racism, and to tone down descriptions of sexuality, phenomena which could not be found in Walch’s text. The conclusion links to Margaret Atwood’s introduction to the most recent Canadian edition of Brave New World and identifies the examination of the two key German translations of the novel as an extension of her argument, pointing to the novel’s relevance for contemporary times, transcending geographical and linguistic borders to include readers in all modern societies and cultures.