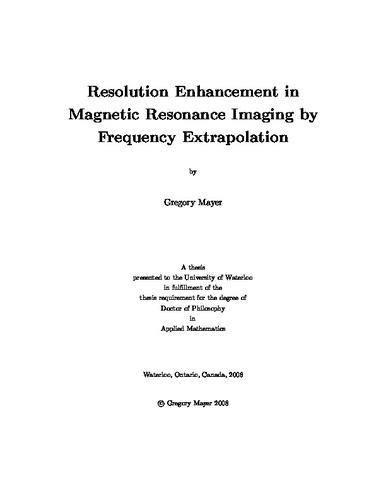 This thesis focuses on spatial resolution enhancement of magnetic resonance imaging (MRI). In particular, it addresses methods of performing such enhancement in the Fourier domain. After a brief review of Fourier theory, the thesis reviews the physics of the MRI acquisition process in order to introduce a mathematical model of the measured data. This model is later used to develop and analyze methods for resolution enhancement, or "super-resolution'', in MRI. We then examine strategies of performing super-resolution MRI (SRMRI). We begin by exploring strategies that use multiple data sets produced by spatial translations of the object being imaged, to add new information to the reconstruction process. This represents a more detailed mathematical examination of the author's Master's work at the University of Calgary. Using our model of the measured data developed earlier in the thesis, we describe how the acquisition strategy determines the efficacy of the SRMRI process that employs multiple data sets. The author then explores the self-similarity properties of MRI data in the Fourier domain as a means of performing spatial resolution enhancement. To this end, a fractal-based method over (complex-valued) Fourier Transforms of functions with compact spatial support, derived from a fractal transform in the spatial domain, is explored. It is shown that this method of "Iterated Fourier Transform Systems" (IFTS) can be tailored to perform frequency extrapolation, hence spatial resolution enhancement. The IFTS method, however, is limited in scope, as it assumes that a spatial function f(x) may be approximated by linear combinations of spatially-contracted and range-modified copies of the entire function. In order to improve the approximation, we borrow from traditional fractal image coding in the spatial domain, where subblocks of an image are approximated by other subblocks, and employ such a block-based strategy in the Fourier domain. An examination of the statistical properties of subblock approximation errors shows that, in general, Fourier data can be locally self-similar. Furthermore, we show that such a block-based self-similarity method is actually equivalent to a special case of the auto-regressive moving average (ARMA) modeling method. The thesis concludes with a chapter on possible future research directions in SRMRI.