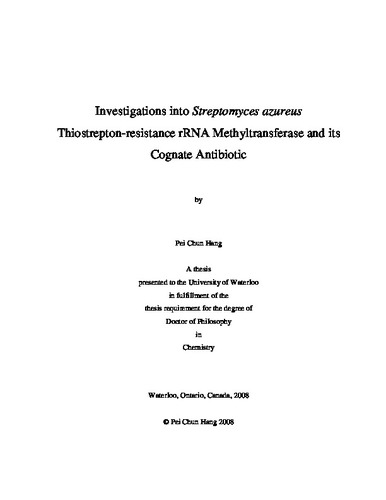 Thiostrepton (TS: TS; C72H85N19O18S5) is a thiazoline antibiotic that is effective against Gram-positive bacteria and the malarial parasite, Plasmodium falciparum. Tight binding of TS to the bacterial L11-23S ribosomal RNA (rRNA) complex of the large 50S ribosomal unit inhibits protein biosynthesis. The TS producing organism, Streptomyces azureus, biosynthesizes thiostrepton-resistance methyltransferase (TSR), an enzyme that uses S-adenosyl-L-methionine (AdoMet) as a methyl donor, to modify the TS target site. Methylation of A1067 (Escherichia coli ribosome numbering) by TSR circumvents TS binding. The S. azureus tsr gene was overexpressed in E. coli and the protein purified for biochemical characterization. Although the recombinant protein was produced in a soluble form, its tendency to aggregate made handling a challenge during the initial stages of establishing a purification protocol. Different purification conditions were screened to generate an isolation protocol that yields milligram quantities of protein with little aggregation and sufficient purity for crystallographic studies. Enzymological characterization of TSR was carried out using an assay to monitor AdoMet-dependent ([methyl-3H]-AdoMet) methylation of the rRNA substrate by liquid scintillation counting. During the optimization of assay, it was found that, although this method is frequently employed, it is very time and labour intensive. A scintillation proximity assay was investigated to evaluate whether it could be a method for collecting kinetic data, and was found that further optimization is required. Comparative sequence analysis of TSR has shown it to be a member of the novel Class IV SpoUT family of AdoMet-dependent MTases. Members of this class possess a non-canonical AdoMet binding site containing a deep trefoil knot. Selected SpoUT family proteins were used as templates to develop a TSR homology model for monomeric and dimeric forms. Validation of the homology models was performed with structural validation servers and the model was then used as the basis of ongoing mutagenesis experiments. The X-ray crystal structure of TSR bound with AdoMet (2.45 Å) was elucidated by our collaborators, Drs. Mark Dunstan and Graeme Conn (University of Manchester). This structure confirms TSR MTase’s membership in the SpoUT MTase family with a deep trefoil knot in the catalytic domain. The AdoMet bound in the crystal structure is in an extended conformation not previously observed in SpoUT MTases. RNA docking simulations revealed some features that may be relevant to binding and recognition of TSR to the L11 binding domain of the RNA substrate. Two structure-activity studies were conducted to investigate the TS-rRNA interaction and TS solubility. Computational analyses of TS conformations, molecular orbitals and dynamics provided insight into the possible modes of TS binding to rRNA. Single-site modification of TS was attempted, targeting the dehydroalanine and dehydrobutyrine residues of the antibiotic. These moieties were modified using the polar thiol, 2-mercaptoethanesulfonic acid (2-MESNA). Similar modifications had been previously used to improve solubility and bioavailability of antibiotics. The resulting analogue was structurally characterized (NMR and mass spectrometry) and showed antimicrobial activity against Bacillus subtilis and Staphylococcus aureus.