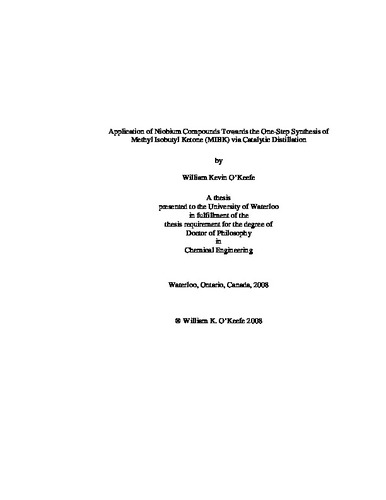 Dispersed niobia catalysts were prepared via a non-aqueous synthesis route. The effects of the type of oxide support, the support thermal pre-treatment, the calcination temperature and the niobia loading on the activity and selectivity for mesityl oxide (MO) synthesis at 160C were investigated in an autoclave reactor. The morphological and chemical properties of the catalysts were characterized via EDXRF, XRD, BET and Raman spectroscopy. The strength and nature of the acid sites were elucidated via in situ DRIFT spectra of the adsorption of pyridine as well as the temperature programmed desorption of NH3 interacting with the surface oxide phase. All four catalyst parameters had significant effects on the catalytic properties. Significantly, the nature of the acidity was clearly linked to the catalyst activity and particularly the catalyst stability. Catalysts exhibiting predominantly Lewis acidity invariably deactivated despite good initial activity, with the final acetone conversion dependent on the catalyst formulation. In contrast, catalysts exhibiting Bronsted acidity showed no evidence of catalyst deactivation after 8 hours of reaction. A plausible mechanism which explains these observations is proposed. Catalysts exhibiting Lewis acidity were more active when the supports were first activated at elevated temperature, likely due to a stronger support-surface oxide interaction as a consequence of increased surface coordinative unsaturation of the support. SiO¬2 supported catalysts exhibiting Bronsted acidity were more active if the supports were initially activated at 100C. Evidently, the hydroxyl groups on the oxide support contribute to the generation of Bronsted acidity. Different oxide supports gave rise to distinct acidic and catalytic properties in the niobia overlayer. The most striking example of this was the direct comparison of niobia dispersed onto two kinds of silica supports following the same preparative method. Unique and very strong acid sites were observed in niobia dispersed onto a commercial SiO¬2 catalyst carrier that were not observed in niobia dispersed onto fumed SiO¬2. For SiO2 catalysts, the activity increased linearly with niobia loading regardless of calcination temperature. In contrast, Al2O3 catalysts exhibited an initial increase in activity for MO synthesis with niobia loading followed by a decrease in activity after reaching a maximum activity below 1/3 monolayer coverage. The effect was more pronounced for catalysts exhibiting Bronsted acidity. It is proposed that adlineation sites are primarily responsible for catalytic activity in Nb2O5/-Al2O3 catalysts exhibiting Bronsted acidity. Niobia catalysts were developed using commercially available catalyst carriers as supports. The macrokinetics of MO and MIBK syntheses were investigated in a benchtop fixed bed flow reactor. The catalysts showed excellent activity for MO and MIBK syntheses at 160°C, typically 0.9 to 1.3 [g/hr*gcat]. However, the MIBK selectivity was constrained from 82 to 85% due to the coproduction of 2-propanol and diisobutyl ketone. The productivity for MO synthesis was found to be strongly dependent on the space velocity suggesting product inhibition. The intrinsic kinetics of the one-step synthesis of MIBK over a 15.2 wt% Pd/Nb2O5/SiO2 catalyst was investigated in an autoclave reactor. A kinetic model was developed and is reported. The one step synthesis of MIBK was investigated at the pilot plant scale via catalytic distillation (CD). An important finding was that while operating at 100% reflux, the accumulation of water in the reactive section resulted in the suppression of the DAA dehydration reaction. The in situ removal of water from the reactive section via an overhead distillate stream operating at 83 to 97% reflux directly resulted in an increase in MIBK productivity and hydrogen uptake efficiency by factors of about 20 yielding a moisture free reboiler product stream with as high as 53 wt% MIBK. The process was found to be controlled by the external mass transfer of hydrogen. Interestingly, the results suggest that the catalyst wetting efficiency affects the transport of hydrogen to the active sites as evidenced by the dependence of MO conversion on the reflux flow rate. The condition of minimum reflux flow rate and maximum hydrogen flow rate resulted in 97% MO conversion and 90 wt% MIBK selectivity.