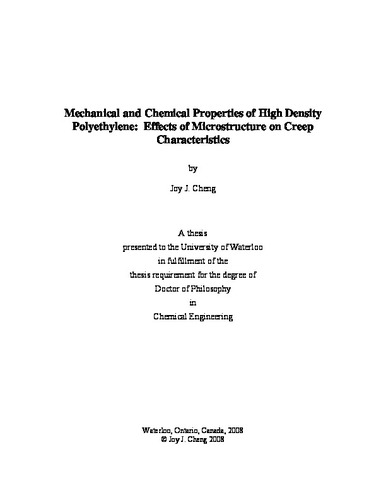 Environmental stress cracking (ESC) can result in catastrophic failure of polyethylene (PE) structures without any visible warning. The use of PE in more demanding applications, such as trenchless piping, can accelerate ESC failure of the material. Besides public safety issues, the replacement and remediation of these failed polyethylene structures also cost both in money and labour. This thesis is part of a collaborative project between the disciplines of chemical and civil engineering to study environmental stress cracking resistance (ESCR) of polyethylene. By combining structural mechanics and (micro)molecular science, new insights into the ESCR behaviour of polyethylene could be achieved. The test commonly used for determining ESCR of polyethylene can be time consuming and rather imprecise. In our study a new testing method has been developed which compares ESCR of resins based on the more direct measure of “hardening stiffness” rather than strain-hardening modulus. Our new method is much simpler than those proposed previously because it is conducted under ambient conditions and does not require specialized equipment for true stress-strain measurements. Comparisons between the conventional ESCR test method and the strain hardening test show that strain hardening can be used to rank ESCR of polyethylene in a reliable fashion. The strain hardening test developed in this thesis has the potential to replace the standard ESCR test that has been in use in industry for the past twenty five years. Most ESCR research has so far focused on bridging-tie-molecules as the main source of inter-lamellar connections. We take a fresh approach and demonstrate in this thesis that physical chain entanglements also contribute to the formation of inter-lamellar linkages. Chain entanglements in the melt state are known to be preserved in the polymer upon solidification, therefore, rheological determination of the molecular weight between entanglements (Me) is used as a measure of chain entanglements for PE. A lower Me value means a higher number of entanglements in the system. The inversely proportional relationship between Me and ESCR indicates that low network mobility due to increasing number of chain entanglements increases ESCR of PE. With the understanding that strain hardening is related to ESCR of polyethylene, the relationship between chain entanglements and tensile strain hardening has also been investigated. By combining experimental observations and parallel micromechanical modeling results, the presence of physical chain entanglements in the amorphous phase was demonstrated to be the factor controlling the strain hardening behaviour of polyethylene. Studies of the effect of inter-lamellar linkages on ESCR of polyethylene have traditionally focused on changes in the amorphous phase. In this thesis, percentage crystallinity and lamella thickness of polyethylene resins were studied to determine their effects on ESCR. The study of the effect of the crystalline phase on ESCR was extended to investigate the lateral surface characteristics of the lamella. An increase in ESCR was observed with increases in lateral lamella area of resins. It was postulated that a larger lateral lamella area results in a higher probability of formation of inter-lamellar linkages. This increase in phase interconnectivity directly results in an increasing ESCR for the resins. Finally, in order to facilitate practical applications of polyethylene (especially in pipes), attempts were made to develop a predictive tool for the quantitative estimation of the long-term ESCR of polyethylene based on the short-term notched constant load test (NCLT). Although previous work on slow crack growth models showed little sensitivity to crack activation energy, the ESC model pursued herein was found to be exponentially dependent on this parameter. Further refinement of the ESC model is needed but the modeling investigation proved fruitful in highlighting several other relationships amongst chemical, physical and mechanical properties of PE resins, such as, that between ESC crack activation energy and the α-relaxation energy of polyethylene.