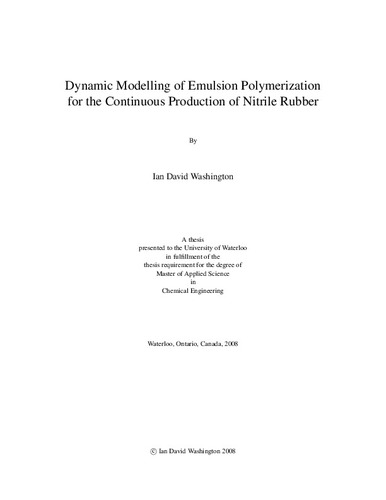 Commodity and specialty-grade rubbers, such as styrene-butadiene (SBR) or nitrile-butadiene (NBR), are industrially produced in large trains of continuous reactors using an emulsion polymerization process. Both SBR and NBR systems are largely unstudied. Furthermore, the studies that have been published on NBR have been typically limited to issues concerning the characteristics of the product behaviour (i.e. oil/fuel resistance, tensile strength, hardness, compression set). In this work a detailed mathematical model has been developed in order to simulate the industrial production of NBR via emulsion copolymerization of acrylonitrile (AN) and butadiene (Bd) in batch, continuous and trains of continuous reactors. Model predictions include monomer conversion, polymerization rate, copolymer composition, number- and weight-average molecular weights, tri- and tetra-functional branching frequencies, and the number and average size of polymer latex particles. NBR is typically produced at low temperatures (5 to 10 degrees C) using a redox initiation system to generate free radicals. The system is typically composed of three phases, water, polymer particles, and monomer. Surfactants and electrolytes are used to stabilize the particle and monomer phases as polymerization proceeds. Of particular industrial importance, in today's world of tailor-made products, is detailed control over the polymerization reaction. Such control requires a deep understanding of the influence of various reactant feed rates and reactor operating conditions on the process response. In particular, policies to minimize copolymer composition drift and to control molecular weight, polydispersity and chain branching at desirable levels. The model is cast in a dynamic form using ordinary differential equations to describe the change of each species, the average number of particles, total average polymer volume, and the first three leading moments of the molecular weight distribution. With a multiphase system it is necessary to determine the concentration of each component in each phase. For this, a constant partition coefficient approach was adopted, as opposed to a purely thermodynamic approach. Particle generation was modelled considering both micellar and homogeneous mechanisms. Model parameters were obtained from the open literature or arrived at after sensitivity analysis. Simulations starting the reactors full of water, feeding all ingredients to the first reactor and using an average residence time of 60 minutes revealed considerable copolymer drift starting in the forth reactor (33% conversion), and heightened molecular weights and chain branching once the monomer phase disappeared (50% conversion). Further simulations revealed that both copolymer drift and the growth of molecular weight and branching could be controlled through additional feed streams of AN and chain transfer agent to downstream reactors. Furthermore, polymer productivity could be increased by appropriately splitting the total monomer feed between the first couple of reactors in the train.