Investigation of Pharmaceutical Compounds in Landfill and Septic System Plumes 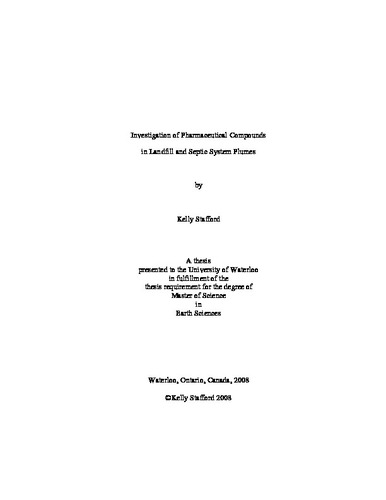 Two municipal landfills and one public septic system in Southern Ontario were studied as potential sources of the pharmaceuticals ibuprofen, carbamazepine, gemfibrozil, caffeine, sulfamethoxazole, and naproxen to groundwater. The background chemistry at each site was also determined. Pharmaceutical analysis was conducted using isotope dilution techniques, coupled with solid phase extraction followed by high performance liquid chromatography electrospray tandem mass spectrometry (HPLC-ESI- MS/MS). An assessment of method performance and extensive quality assurance and quality control practices were employed. At the septic system site, pharmaceuticals were detected at the furthest sampling point, 30 m downgradient from the source area. The highest concentrations measured in groundwater were for carbamazepine (2,050 ng L-1), sulfamethoxazole (1,990 ng L-1) and ibuprofen (1,790 ng L-1). The other pharmaceuticals analysed were observed at concentrations in the range of <1 to 10 ng L-1 (gemfibrozil), <8 to 625 ng L-1 (naproxen), and <1 to 160 ng L-1 (caffeine). Under saturated groundwater transport, attenuation was not strong within the plume as all pharmaceuticals were detected at distance from the source. In the unsaturated zone, most pharmaceuticals appeared to be more greatly attenuated than in the saturated zone. This greater extent of removal in the unsaturated zone is attributed to increased degradation associated with elevated oxygen concentrations. At the two landfill sites, no pharmaceutical compounds were detected in any of the groundwater samples collected within previously defined plumes. Assuming these drugs are disposed in landfill wastes, the absence of detections suggests degradation and attenuation of these pharmaceuticals is occurring. Some of the conditions that may contribute to attenuation include a thick unsaturated zone, strongly reducing conditions, and high sorptive capacity of the waste. Specifically, waste typically has a higher organic content than aquifer materials, and a lower pH, particularly in the early stages of decomposition. These conditions would result in a potentially higher attenuation of drugs within the waste pile. This study suggests that management programs focused on protection of groundwater quality should take into consideration the potential persistence of pharmaceuticals in septic system environments.