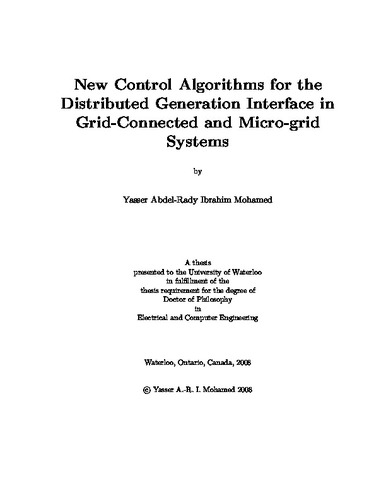 Driven by economic, technical, and environmental reasons, the energy sector is moving into an era where large portions of increases in electrical energy demand will be met through widespread installation of distributed resources or what's known as distributed generation (DG). DG units can operate in parallel to the main grid or in a micro-grid mode. The later is formed by a cluster of DG units connected to a distribution network to maintain the reliability of critical loads, mainly when the grid supply is not available. Distributed resources include variable frequency sources, high frequency sources, and direct energy conversion sources producing dc voltages or currents. The majority of distributed resources are interfaced to the utility grid or to the customer load via dc-ac pulse-width-modulated (PWM) voltage source inverter (VSI) systems. However, these interfaces introduce new issues, such as the absence of the physical inertia, wide-band of dynamics, limited overload capability, susceptibility to parameters variation, and switching harmonics generation. In addition, the uncertain and dynamic nature of the distribution network challenges the stability and control effectiveness of a grid-connected inverter-based DG interface. Generally, difficulties appear in the form of grid impedance and interfacing parameter variations, fast and slow grid-voltage disturbances, grid distortion and unbalance, and interactions between the inverter ac-side filter and the grid. On the other hand, a micro-grid system will be dominated by inverter-based DG units. Unlike conventional power system generators, inverter-based DG units have no physical inertia. This fact makes the micro-grid system potentially susceptible to oscillations resulting from system disturbances. Severe and random disturbances might be initiated in a micro-grid system, due to load changes, the power sharing mechanism of the inverters and other generators, and interactions between the DG interface and the network. Motivated by the aforementioned difficulties, this thesis presents new control algorithms for the DG interface that guarantee stable and high power quality injection under the occurrence of network disturbances and uncertainties, in both the grid-connected and micro-grid systems. The control architecture of the proposed DG interface relies on the following subsystems. First, a newly designed deadbeat current regulation scheme is proposed. The proposed design guarantees high power quality current injection under the presence of different disturbing parameters such as grid voltage distortion, interfacing parameter variation, and inverter system delays. Further, it utilizes the maximum dynamic performance of the inverter in a way that provides a high bandwidth and decoupled control performance for the outer control loops. Different topologies of the ac-side filter are considered for the current control design. Second, a novel adaptive discrete-time grid-voltage sensorless interfacing scheme for DG inverters is proposed. The adaptive interface relies on a new interface-monitoring unit that is developed to facilitate accurate and fast estimation of the interfacing impedance parameters and the grid voltage vector (magnitude and position) at the point of common coupling. The estimated grid voltage is utilized to realize a grid-voltage sensorless interfacing scheme, whereas the interfacing parameters are utilized for the self-tuning control and interface-parameter monitoring. Further, a simple and robust synchronization algorithm and a voltage-sensorless average power control loop are proposed to realize an adaptive voltage-sensorless DG interface. The voltage-sensorless interface positively contributes to the elimination of the residual negative sequence and voltage feed-forward compensation errors, and to the robustness of the power sharing mechanism in paralleled inverter systems, where the power-sharing mechanism is generally based on open-loop controllers. Third, a new voltage control scheme for the DG interface featuring fast load voltage regulation and effective mitigation of fast voltage disturbances is proposed. The proposed voltage control scheme targets the problem of fast and large-signal-based voltage disturbances, which is common in typical distribution feeders. A hybrid voltage controller combining a linear with a variable-structure-control element is proposed for the DG interface. Positive and dual-sequence versions of the proposed voltage controller are developed to address the issue of unbalanced voltage disturbances. The proposed voltage controller successfully embeds a wide band of frequency modes through an equivalent internal model. Subsequently, wide range of balanced and unbalanced voltage perturbations, including capacitor-switching disturbances, can be effectively mitigated. Fourth, to constrain the drift of the low frequency modes in a conventional droop-controlled micro-grid, a new transient-based droop controller with adaptive transient-gains is proposed. The proposed power-sharing controller offers an active damping feature that is designed to preserve the dynamic performance and stability of each inverter unit at different loading conditions. Unlike conventional droop controllers, the proposed droop controller yields two-degree of freedom tunable controller. Subsequently, the dynamic performance of the power-sharing mechanism can be adjusted, without affecting the static droop gain, to damp the oscillatory modes of the power-sharing controller. The overall robust DG interface facilitates a robust micro-grid operation and safe plug-and-play integration of DG units on existing distribution systems; hence increasing the system penetration of DG. The direct result of this development is huge financial saving for utilities by capturing the salient features of deploying DG into existing utility networks. Further, these developments are significant to the industry as they provide the blue print for reliable control algorithms in future DG units, which are expected to operate under challenging system conditions.