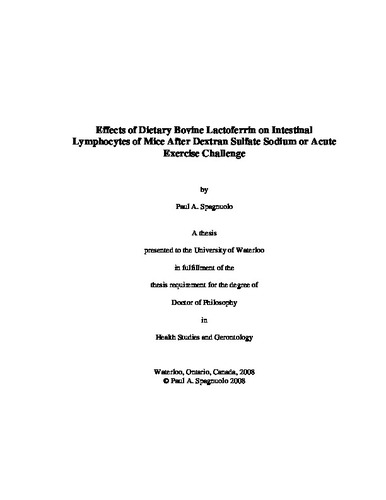 Background: Inflammation, if uncontrolled, can promote the formation of colon cancer. Intestinal lymphocytes (IL) are immune cells that can participate in inflammation through the generation of cytokines and by causing direct cellular injury. Apoptosis, or programmed cell death, regulates the population of lymphocytes and dysregulation of this process results in the prolonged activation of IL that occurs during inflammation. Therefore, inducing apoptosis of IL is a viable mechanism by which inflammation and possibly colon carcinogenesis could be prevented. Experimentally, inflammation may be induced in mice by: 1) the addition of the chemical irritant dextran sulfate sodium (DSS) to drinking water or 2) exposure to acute exercise (AE; intense treadmill running). Bovine lactoferrin (bLf) is a dietary whey protein with demonstrated ability to promote anti-inflammatory responses by reducing pro-inflammatory or increasing anti-inflammatory cytokine concentrations within the intestine. There are also reports that bLf can alter apoptotic proteins in the intestinal epithelium to favour cell death. Moreover, athletes have been reported to supplement their diets with whey protein; it is also known clinically that after heavy competition some athletes may experience gastrointestinal distress. The role, however, of bLf in reducing inflammation by initiation of apoptosis or alteration of cytokine levels in IL has not been examined. Objectives: The primary objective of this research was to determine whether dietary bLf affects mouse IL apoptosis and cytokine concentrations in: 1) a normal, non-inflamed state, 2) following AE challenge and 3) following DSS treatment. A second objective was to directly examine the potential protective effects of dietary bLf from inflammatory damage caused by DSS and AE challenge when administered alone or in combination with a carcinogen. Methods: A total of 252 female C57BL/6 mice were used in the experiments. Apoptotic proteins (Bcl-2, caspase 3, Bax, cytochrome c), inflammatory cytokine proteins (TNF-α and IL-10) and a transcription factor for pro-inflammatory cytokines (NFκB) were determined in isolated mouse IL by Western blot analysis. Flow cytometry was used to determine the extent of apoptosis in mouse IL subsets by measuring phosphatidylserine surface expression using Annexin V+ (ANN+) and propidium iodide staining. Tissue inflammation was determined by histology (H&E staining) on segments of mouse small and large intestine. Diets were prepared and pelletted to contain 20% total protein and contained either bLf or were the control formulation (no bLf). Mice were exposed to bLf containing diets for 4 d or 12 d prior to sacrifice. DSS was provided at 5% in the drinking water for 4 consecutive days prior to sacrifice. Animals were subjected to three repeated bouts of AE (each separated by 24 h rest) involving treadmill running and sacrificed either immediately or 24 h after the final exercise bout. In the experiment involving carcinogenesis, mice were given two subcutaneous injections of azoxymethane (AOM), followed by a two week incubation period, and subsequently exposed to bLf or the control diet. Results: Results from the first experiment determined that 2.0% bLf was effective at reducing mouse IL levels of TNF-α (p<0.05) (pro-inflammatory) and increasing the percentage of apoptotic CD4+ IL (CD4+/ANN+, p<0.05) in healthy mice. Thus, 2.0% bLf was used for the subsequent experiments. Dietary bLf administration in mice exposed to AE was associated with lower levels in mouse IL of the anti-apoptotic protein Bcl-2 (p<0.01) and of TNF-α (p<0.05) and NFκB (p<0.05), both pro-inflammatory proteins. Further, the exercise protocol resulted in oxidative stress, as measured by 8-iso prostaglandin F2α levels in plasma, but did not induce intestinal inflammation, evident by the absence of both tissue damage and infiltration of immune cells. Following DSS treatment, mice supplemented with bLf enriched diets had lower levels of both TNF-α (non-significant, 34% reduction) and NFκB (p<0.05) and increased concentrations (p<0.01) of cytochrome c, a mitochondrial protein associated with cell death. DSS exposure in mice resulted in gross morphological alterations and infiltration of immune cells in the small and large intestine; these changes in tissue histology were not affected by the addition of bLf. Mice injected with AOM and then subjected to DSS, but not AE, had increased numbers (p<0.001) of aberrant crypts, preneoplastic colonic lesions, compared to animals only receiving AOM injection. Dietary bLf did not affect any of these carcinogenic processes. Conclusions: Collectively, these results suggest that dietary bLf administration reduces pro-inflammatory cytokine levels and has limited effects on apoptosis of mouse IL. Moreover, these modifying effects of bLf did not result in mucosal protection, as evident in the inability of this protein to reduce DSS-induced tissue damage or formation of aberrant crypts. Physiological and Clinical Implications: Although the long term physiological consequences of bLf supplementation in the regulation of intestinal immune homeostasis require further study, the following clinical implications are tentatively suggested by the findings from this thesis research. First, dietary bLf supplementation does not provide direct protection of the intestine during inflammation either with or without exposure to the carcinogen (i.e., AOM); hence, bLf (at least in the dietary concentration and exposure used in these experiments) may not be useful in reducing the formation of aberrant crypts and carcinogenesis. Second, dietary bLf should not be recommended as a supplement at this time for athletes experiencing intestinal distress since it had no impact on tissue indicators of disease in a model (DSS) shown to produce extensive inflammation and tissue pathology. Nonetheless, the findings raise the possibility that bLf can modify both cytokines and apoptotic protein expression in IL and may influence some aspects of inflammatory processes in the gut.