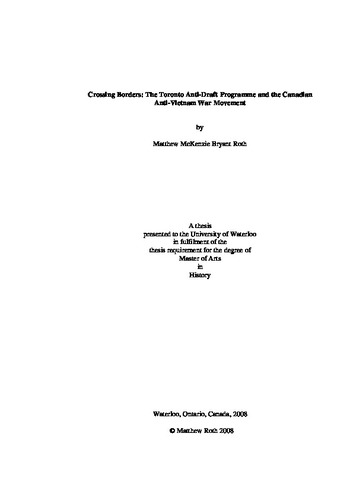 This study examines how the Toronto Anti-Draft Programme (TADP) assisted American war resisters who came to Canada in response to the Vietnam War. It illustrates how the TADP responded to political decisions in Canada and in the United States and adapted its strategies to meet the changing needs of war resisters who fled to Canada. The main sources of material used for this research were the TADP’s archival records, newspaper accounts and secondary literature. This study traces the organization’s origins in the Canadian New Left before looking at how TADP released the Manual for Draft-Age Immigrants to Canada; a document that advised war resisters on how to successfully prepare for immigration. It will also explore how TADP provided immigration counselling, employment, housing services and emotional support to American war resisters. Some of the organization’s principal actors and its relationship with other Canadian aid organizations are also examined. As the number of draft resisters coming to Canada decreased during the war, the number of military resisters entering the country increased. This shift led to a change in the type of counselling the TADP provided, a reorientation that is also discussed here. As well, the unexpected numbers of African-Americans and women resisters who crossed the border presented a unique set of challenges to the TADP. Finally, this thesis examines the TADP’s attempts to aid American war resisters in Sweden, spread the word about the Canadian government’s liberalized immigration regulations in 1973, and address the issue of amnesty for resisters in America.