Pulsed Biosparging of the E10 Gasoline Source in the Borden Aquifer 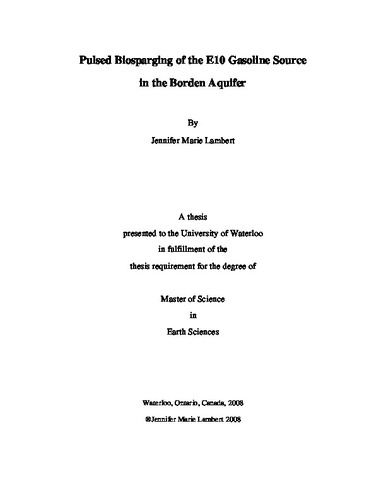 Air sparging is a technique used to remediate gasoline contamination. In sparging, air is injected below the target zone and removes contamination via two separate mechanisms; volatilization and biodegradation. In volatilization, the air contacts the contamination as it moves upward. The contaminant will partition to the vapor phase based on its volatility and will be removed as the air reaches the atmosphere. For biodegradation, the oxygen in the airstream is used for microbial activity. Pulsed air sparging, otherwise known as pulsed biosparging, has been found to be more effective than continuous air sparging. Pulsed biosparging enhances treatment because it induces groundwater movement and mixing. The general mechanisms for treatment of gasoline sources using air sparging are relatively well characterized. However, air flow through the subsurface and the total hydrocarbon mass lost are difficult to predict and quantify. This project was intended to quantify the mass lost through volatilization and through biodegradation at the E10 gasoline source using pulsed biosparging, and to determine the effect of the source zone removal on downgradient dissolved BTEX concentrations. The remedial system consisted of two major components: the air sparging system, with three injection points; and a soil gas collection system. The soil gas collection system was comprised of an airtight box that covered the source area and the monitoring wells upgradient and downgradient of the source. Off-gas from the soil gas collection system was monitored continuously using a PID. The off-gas was also sampled frequently for BTEX, pentane, and hexane to determine the hydrocarbon mass removed; and for O2 and CO2 to determine biodegradation rates. The remedial system ran for approximately 280 hours over 33 days. Of the estimated 22.3 kg of gasoline residual in the source zone, 4.6 kg or 21% of the residual was removed via volatilization and 4.9 kg or 22% of the residual was removed via biodegradation. Leakage outside the system was estimated at less than 0.1% of the total mass. Groundwater samples were collected when the last sparged air was calculated to arrive at the row 2 downgradient fence. The average BTEX groundwater concentration after sparging was 40% of the pre-sparging concentration. The benzene mass discharge decreased 27%, the ethylbenzene mass discharge decreased 65%, the p/m-xylene mass discharge decreased 6%, and the o-xylene mass discharge decreased 5%. The mass discharge for naphthalene and TMB isomers increased 19%. However, these values fit in with long-term groundwater concentration trends. Additional sampling is recommended to determine if the sparging made a significant impact on mass discharge leaving the source.