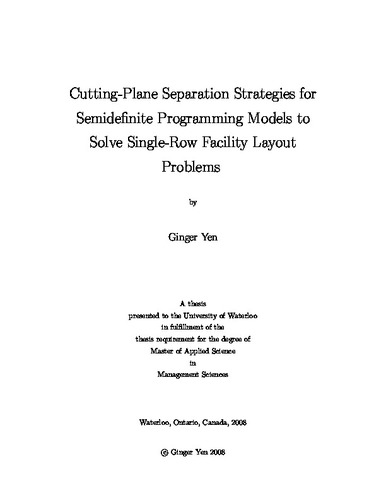 The single-row facility layout problem (SRFLP) is concerned with finding the optimal linear placement of n departments with different lengths in a straight line. It is typically achieved by minimizing the cost associated with the interactions between the departments. The semidefinite programming (SDP) relaxation model that incorporates cutting planes proposed recently by Anjos, Kennings, and Vannelli (AKV) was considered a breakthrough in the field. This thesis presents a new SDP model AKV' and compares the two relaxations. The AKV' is largely based on the previous model, but it reduces the number of linear constraints from O(n³) to O(n²). Therefore, it reduces the computing time at the expense of a slightly weaker lower bound. However, AKV' is observed to pay off as the instance size increases. By examining the gap for both the AKV and AKV' relaxations, we notice that both relaxations generate very small gaps at the root node, which demonstrates the effectiveness of the relaxations. Six different strategies are presented to separate the cutting planes for the medium-sized SRFLP. In combination with the two SDP relaxations, we compare the six strategies using three instances of different characteristics. An overall best strategy is deduced from the computational results, but the best choice of relaxations and the best number of cuts added at each iteration changes depending on the characteristics of the instances. Two new cutting plane strategies are proposed for large instances. This allows the solution to optimality of new instances with 36 departments, which is higher than previously published results in literature. We also briefly point out how the computing time can vary greatly between different sets of data of the same size due to the characteristics of the department lengths.