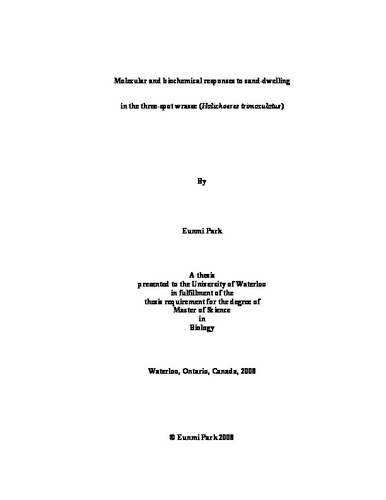 The three-spot wrasse (Halichoeres trimaculatus) is distributed in and around the coral reefs and shallow rocky areas in the tropical and subtropical Indo-Pacific regions. This species displays a distinct diurnal behavior, burrowing under the sand at dusk and emerging out of the sand at dawn, which appears to be synchronized to the photoperiod. In this thesis, the hypothesis tested was that this unique life-style subjected the animal to daily hypoxia exposure while under the sand at night. The measurements of oxygen concentration in the sand around the fish at night confirmed a complete lack of oxygen. The study had three specific objectives: i) obtain a tissue-specific temporal profile of the hypoxia-related molecular and biochemical responses in wrasse over a 24 h diurnal cycle, ii) determine the responses that were unique to sand dwelling and iii) determine if the responses seen at night in the sand are similar to an anoxic response in this species. Wrasse were maintained in a flow-through seawater aquaria (29 ±1°C), with sand at the bottom for the fish to hide, and kept under natural photoperiod. The fish were sampled at 10:00, 14:00, 18:00, 21:00, 24:00, 3:00, and 6:00 clock time and plasma and tissue (brain, liver, gill, heart and muscle) were collected to determine the molecular and biochemical responses over a 24 h period. Fish were also sampled from aquaria without sand at night to determine the responses that were specific to hiding in the sand, while fish exposed to nitrogen gas bubbling for 6 and 12 h served as the anoxic group. A partial cDNA sequence of the hypoxia-inducible factor (HIF)-1α and neuroglobin (two genes that are hypoxia-responsive) were cloned and sequenced from the liver and brain, respectively, and their expression was determined using real-time quantitative PCR. HIF-1α mRNA abundance was higher in the brain compared to the liver and the gills, while a clear pattern of diurnal change in tissue HIF-1α and brain neuroglobin gene expressions was not observed at night relative to the fish during the day. However, wrasse brain showed a significant reduction in glycogen content at night under the sand and this corresponded with a higher hexokinase activity and increased glucose level suggesting enhanced glycolytic capacity. The plasma glucose and lactate levels were significantly lower at night, while in sand, relative to the day. The lower plasma glucose at night corresponded with a significant drop in liver gluconeogenic capacity (reduction in phosphoenolpyruvate carboxykinase, a key gluconeogenic enzyme, activity), while the lower lactate levels support a lack of activity along with the absence of glycogen breakdown in the muscle. Overall, there was a reduction in the metabolic capacity in the gills, heart, liver and muscle, but not the brain, supporting a tissue-specific metabolic reorganization as an adaptive strategy to cope with sand-dwelling in the wrasse. The molecular and biochemical responses seen in the wrasse at night in the sand was dissimilar to that seen in fish exposed to anoxia, leading to the conclusion that this species is not experiencing a complete lack of oxygen while under the sand. Also, the lack of muscle movement associated with sand dwelling at night limits anaerobic glycolysis for energy production, thereby eliminating lactate accumulation that was evident in fish exposed to anoxia. Taken together, wrasse showed a tissue-specific difference in metabolic capacity at night while hiding under the sand. While the mechanism involved in this tissue-specific energy repartitioning at night is unclear, one hypothesis involves selective increase in blood flow to the brain, while limiting peripheral circulation, as a means to maintain oxygen and glucose delivery to this critical tissue while the fish is hiding under the sand. The higher metabolic capacity of the brain, but not other tissues, at night under the sand suggests that maintaining the brain function is essential for the diurnal life-style in this animal.