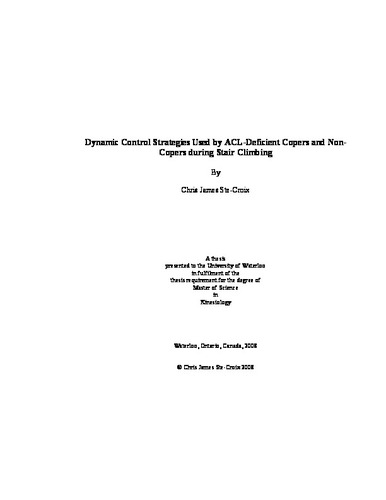 Background: Osteoarthritis (OA), the most common form of arthritis, is a disorder that affects bi-articular synovial joints and is characterized as the focal loss of articular cartilage with changes to the subchondral and marginal bone, synovium and para-articular structures. Biomechanical factors such as obesity, joint loading, joint injury, joint deformity, level of sports participation, occupational factors, and muscle weakness specifically affect joint loading which influences local OA development. One way to assess the effect of altered loading patterns on a joint is to examine changes following joint injury. An appropriate model for this purpose is the anterior cruciate ligament (ACL) rupture in the knee joint. Recent evidence has shown that some ACL-D subjects are able to perform activities at levels similar to those of normal subjects. Termed ‘Copers’, these individuals demonstrate greater knee stability than other ACL-D subjects who are considered ‘Non-Copers’. Therefore, the purpose of this study was to evaluate the dynamic control strategies used by ACL-D Copers and Non-Copers during a stair climbing task, and compare them to a healthy population as a means to identify possible susceptabilities to OA. Methods: A total of 20 participants were collected including 10 (5 male and 5 female) Healthy controls, 5 (2 male and 3 female) ACL-D Copers, and 5 (1 male and 4 females) ACL-D Non-Copers. The Healthy group had an average mass of 75.9 kg ±16.1 kg and an average height of 174.3 cm ±12.1cm, while the Copers group had an average mass of 71.7 kg ±6.2 kg and an average height of 170.8 cm ±5.6 cm, and the Non-Copers group had an average mass of 71.3 kg ±13.1 kg and an average height of 168.7 cm ±4.8 cm. ACL-D subjects were classified as either a Coper and Non-Coper based on a screening examination prior to the evaluation.The stair climbing task involved each subject completing 20 stair-climbing trials (10 ascent and 10 descent). Kinematic and kinetic outcomes were collected on the lower limbs, as well as,electromyography (EMG) of the tibilais anterior, medial and lateral gastrocnemius, vastus lateralis, vastus medialis, semitendinosus, and biceps femoris muscle group were collected bi-laterally. A one-way analysis of variance (ANOVA) was used to test each outcome’s statistical significance (α= 0.05). Results and Discussion: During ascent the Non-Copers and Copers group completed the task with greater knee flexion than the healthy group (although not significant), while during descent the Non-Copers maintained approximately 5 degrees greater flexion than the other groups. A significant difference was observed with the moment about the knee (flex-ext) between the Healthy group and the Non-Copers group during the late stages of stair ascent with the healthy group maintaining a flexor moment and the Non-Copers group using an extensor moment. This extensor moment correlated with the increase of quadriceps activity among the Non-Copers which may lead to instances of knee joint instability. The Non-Copers group had increased activity of the hamstring muscle group without any attenuation in the quadriceps muscles. This will most likely increase the forces acting on the knee joint. Since, the knee is at greater flexion with an increased amount of forces, the Non-Copers may be at a greater risk articular cartilage breakdown. Throughout the majority of descent we saw an elevated amount of hamstring activity in the Non-Copers group at greater knee flexion angles as a potential means of controlling displacement of the tibia. This increase in hamstring muscle activity by the Non-Copers, without any significant decrease in quadriceps activity, places greater forces on the knee at different knee angle, when compared to the healthy group and may promote the onset of osteoarthritis. The Non-Copers also had increased moments about the knee joint for the majority of stance in both the flexion-extension plane and the abduction-adduction plane, when compared to the healthy group.