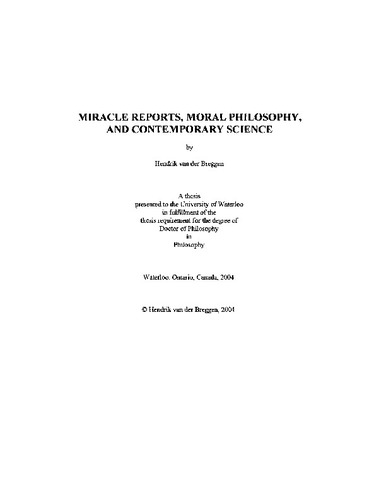 In the case of miracle reports, David Hume famously argued that there is something about "the very nature of the fact" to which the testimony testifies which contains the seeds of the testimony's destruction as credible evidence. The Humean idea, still held by several important contemporary philosophers, is that the very concept of miracle has logical implications for the world, these implications (especially those arising from a miracle's law-violating nature) make a miracle extremely improbable, and so, at least for thinking people, reports of a miracle's occurrence are rendered unbelievable. Hume and apparently some of his contemporary disciples view this feature of miracle reports as an "everlasting check" against reasonable belief in reports of <I>any</I> miracle's occurrence. </P><P> At the risk of seeming unfair to Hume, but taking seriously Hume and company's apparent judgment that the Humean argument is at least a <I>present day</I> check on miracle reports, this dissertation transfers the heart of the Humean argument <I>into the present</I> and it makes a case for thinking that, today, the Humean argument <I>backfires</I>. In this dissertation a close conceptual look is taken of the "very nature" of the miraculous object of a miracle testimony, a very nature paradigmatically given to us in the reports of Jesus' (allegedly) miraculous resurrection and virgin birth; and then an examination occurs of the logical implications of this conceptual analysis in the context of what science tells us is reasonable to believe about the world at the beginning of the 21st century, and in the context of what some moral philosophizing allows us to reasonably believe as well. The result, this dissertation contends, is that, contrary to what Hume and company think, the concept of miracle contains the seeds not for <I>weakening</I>the credibility of a miracle testimony but for <I>strengthening</I> it. </P><P> The thesis of this dissertation is the following: On the specification of a miracle concept that is comprehensive enough to capture such paradigm cases as Jesus' allegedly miraculous resurrection and virgin birth (and which does not include a violation of a law of nature clause in its definition), certain features of this concept's metaphysical and moral implications - when examined in the context of some implied/predicted findings from contemporary science plus some implied/predicted discernments from moral philosophy - serve to enhance the plausibility of a hypothesis which employs the miracle concept to describe the operation of a theoretical causal entity or power to make sense of some facts which suggest such an operation. </P>