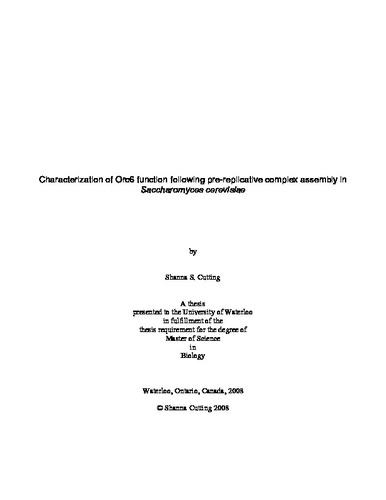 Pre-replicative complex (pre-RC) components the origin recognition complex (ORC), Cdc6, and Cdt1, play key roles in the recruitment, and loading of the replicative helicase, the minichromosome maintenance complex (Mcm2-7), onto DNA to license origins for replication. Until recently, the prevailing model for pre-RC assembly predicted that once MCMs are loaded at origins, ORC, Cdc6, and Cdt1 are dispensible for replication. Contrary to this model, previous work has shown that Orc6 is required following origin licensing, for the continued association of the MCM complex in late G1 phase. In this study, a similar role in pre-RC maintenance has been demonstrated for Cdc6, and Cdt1. Chromatin immunoprecipitation (ChIP) analysis has shown that late G1 phase depletion of either Cdc6, or Cdt1 leads to the destabilization of MCMs from origins, although this destabilization is more pronounced for Cdc6 depletion than for Cdt1. Furthermore, the resynthesis of Cdc6 following its depletion, allows for the reassembly of pre-RCs in late G1 phase, and restores competence for DNA replication. In this study, a potential role for Orc6 in mitosis/cytokinesis in budding yeast has also been characterized, as research with both Drosophila and human cell lines has pointed to a role for Orc6 in these processes. Deleting HOF1 and CYK3 (two proteins involved in cytokinesis in budding yeast) leads to a synthetic lethal phenotype, suggesting that the resulting gene products function in redundant cytokinetic pathways. Indeed, Hof1 has been shown to be primarily involved in actin ring contraction, while Cyk3 functions in septum formation, both pathways of which are important for budding yeast cytokinesis. Interestingly, previous work has identified an Orc6-Hof1 interaction in budding yeast. In this study, it has been demonstrated that following Orc6 depletion in a GAL1-ORC6/Δcyk3 strain, fluorescence activated cell sorting (FACS) analysis is consistent with a stronger cytokinetic defect phenotype than observed for Δcyk3 cells. Preliminary cell counts indicate that following Orc6 depletion, a higher percentage of GAL1-ORC6/Δcyk3 cells display misshapen mother bud necks than in an isogenic Δcyk3 strain. Cell synchronization experiments have demonstrated that Orc6 depletion during a G2/M phase arrest, leads to a block in cell cycle progression following release.