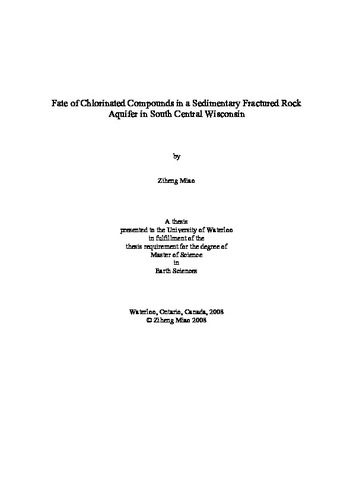 A study was carried out in a sedimentary fractured rock site located in south central Wisconsin, US, which was impacted by DNAPL releases estimated to occur in the 1950’s and 1960’s. The majority of the DNAPL has accumulated in the upper portion of the Lone Rock Formation at a depth between 140 and 180 ft bgs referred as Layer 5 in this study. A groundwater VOC plume of more than 3km long has formed in this Layer. The DNAPL is mainly composed of 1,1,1-TCA, PCE, TCE and BTEX, while large amounts of biodegradation products such as cis-DCE and 1,1-DCA are present in the plume. Long term VOC data have been collected at the site and diverse geological and hydrogeological techniques have been applied to have a better understanding of the DNAPL history and behavior of the VOC plume. Evidence of biodegradation was also documented near the DNAPL source in these studies. The thesis objectives of the present study aimed first to have a better understanding of the long term contaminant distribution and degradation history at the site. This objective was accomplished reviewing the VOC historical concentration data collected from 1992 to 2006 in the wells tapping the most contaminated. hydrogeological unit in the bedrock (Layer 5) and in the overburden aquifer (referred as Layer 2). The second objective aimed to evaluate the current degree or extent of biodegradation of chlorinated compounds, which was accomplished evaluating the current groundwater redox conditions and using a combined analysis of VOC concentration and carbon isotope data collected in groundwater in September 2007. The historical data collected between1992 to 2006 showed the degradation of the VOC plume in Layer 5 was controlled by the availability of electron acceptors and redox conditions in the fracture bedrock aquifer. This pattern and the extension of the VOC plume were linked to different DNALP pumping events in the source zone and the operation of a Hydraulic Barrier System. The current geochemical and isotope study showed a different pattern of biodegradation of chlorinated compounds in different parts of the plume. The cis-DCE tend to accumulate in the area from the source to the middle of the plume and around 80 % of biodegradation of 1,1,1-TCA to 1,1-DCA was observed in this area. The fringes of the plume were characterized by a dominant presence of TCE and 1,1,1 TCA. These patterns were linked to different redox conditions and amount of electron acceptors. The cis-DCE dominated area is characterized by anaerobic conditions and the presence of relative high amount of BTEX. The TCE-dominated area is under aerobic condition and no BTEX was found in this area. The operation of the Hydraulic Barrier System seems to have change redox condition which influenced the extent of degradation in the plume, especially in the area between the extraction wells. The formation of large amounts of VC in Layer 2 and the more reducing (at least sulfate reducing and maybe methanogenic conditions) of the groundwater in this Layer compared to Layer 5 confirmed the extent of VOC biodegradation is linked to the availability of electron donors. This study provides information about the current degree of the biodegradation of chlorinated compounds at a fracture rock site. This information is very valuable for the evaluation of natural attenuation as strategy for long term plume management or for future remediation strategies such as biostimulation or bioaugmentation at the site. This study also shows the present and long term behavior of the chlorinated compounds (degradation history) in the most contaminated hydrogeologic unit (Layer 5), has mainly been controlled by plume management strategies including DNAPL pumping in the source and the creation of a Hydraulic Barrier System. The ketones and BTEX, that acted as electron donors and carbon substrate for the microbial community responsible for the dechlorination of chlorinated compounds were shown to have controlled the past and current redox conditions and thus the degree and potential of biodegradation of chlorinated ethenes and chlorinated ethanes at the study site.