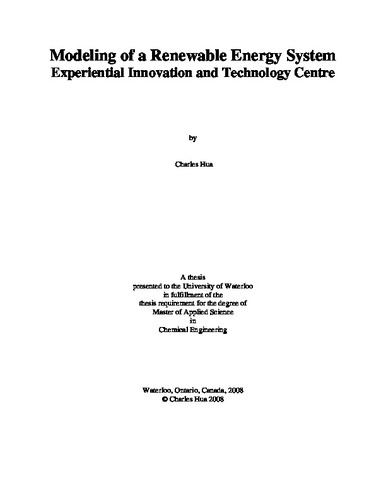 Energy consumption has been increasing rapidly over the last few decades. In 2003, Ontario’s energy needs were in the order of 155.1 TWh and are expected to increase to 168.9 TWh by 2014. This will create an increased demand for power generation, electricity distribution, resources, as well as the generation of pollution. Thus, there is a requirement for infrastructure renewal and expansion within a sustainable energy management framework. With respect to stationary power requirements, there are many solutions available such as consumption reduction and overall energy efficient. Demand side management and energy conservation will mitigate the problem, is it likely that more power generation will be required. A distributed generation system is most desirable as there is relief for the electricity distribution grid. Key to this study is the examination of the potential for the distributed energy system to produce electricity for the facility while also producing hydrogen to support a small fleet of vehicles for use at the facility, demonstrating an integrated energy system. The results for the fleet of vehicles are preliminary only, while most of the focus was put into the energy system of the facility. The application of this distributed system will be in the commercial/industrial sector where a technology center will be the primary load while supplying power to the grid when excess power is generated. There are many sources of distributed energy available to be used in distributed generation systems ranging from diesel generators to wind turbines, the various green generation technologies have been evaluated during this study. The evaluation takes into account cost, efficiency, size, and availability. This study has shown that such a facility can produce emissions free distributed electricity in a Net Zero manner with an electrical grid connection, as well as economically support refuelling a fleet of hydrogen fuel cell vehicles. The selected systems have been modeled and sized to demonstrate operating conditions and assess the energy/power flow. Different scenarios were simulated to show how the system will react to intermittent environmental conditions, such as wind speed.