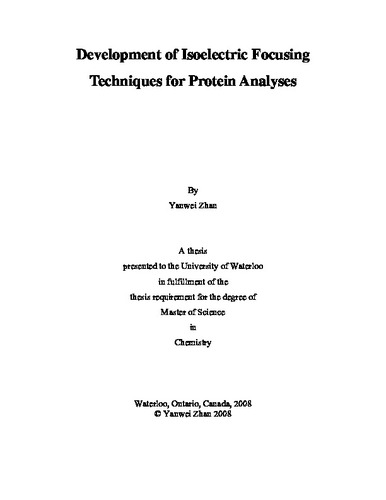 Isoelectric focusing (IEF) is a powerful approach in separations of zwitterionic substances such as proteins, peptides and amino acids. It is important in proteomic research. Generally, in IEF, carrier ampholytes (CAs) are necessary to establish a stable pH gradient. However, CAs also bring attendant problems such as a decrease in detection sensitivity and suppression of ionization of analytes in mass spectrometry (MS) detection. It is desirable to build a pH gradient without using CAs. A simple slab based design was developed to establish a pH gradient using the electrolysis of water and the strength of free flow electrophoresis (FFE). The simple and robust CA free FFE-IEF design was applied in protein fractionation. In capillary format, capillary isoelectric focusing (CIEF), coupled to MS is a promising hyphenated technique for biomolecular analysis based on the combination of the high separation power of CE and the high specificity of MS. Coupling of the instruments is usually achieved with a coaxial sheath liquid interface, which decreases the detection sensitivity because of the dilution of sample by the sheath liquid. In this project, nano-electrospray, a sheathless interface, was used for coupling. Additionally, another major challenge is the presence of CAs which suppresses the ionization of analytes and contaminates the MS. In order to complete this project, a microcross union was chosen to couple CIEF with MS. A makeup solution was introduced to dilute the concentration of CAs after IEF to assist the ionization for MS detection. The makeup solution could replace the sheath liquid and could be maintained at a low flow rate so that nanoelectrospray could be performed. Monoliths can be described as integrated continuous porous separation media for micro scale separation columns. CAs were immobilized at different positions in the column according to their pIs, generating a monolithic immobilized pH gradient (M-IPG). In this project, carrier ampholytes was immobilized in poly (GMA-co-EDMA) based monolithic capillary and poly (GMA-co-acrylamide) based monolithic capillary to form a pH gradient. Two proteins were separated by IEF, which was implemented in poly (GMA-co-acrylamide) based monolithic capillary without CAs. The interface to MS was performed following the use of a microcross union as described previously. No typical noise of CAs was observed in the MS spectrum.