The Statistical Fingerprints of Quantum Gravity 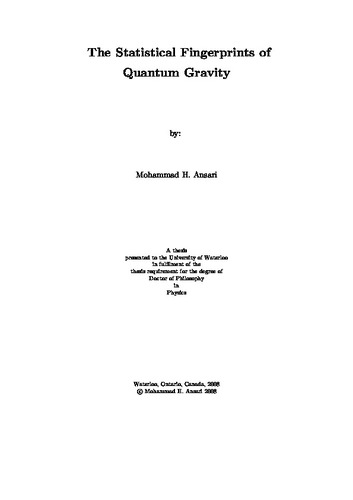 In this thesis some equilibrium and non-equilibrium statistical methods are implied on two different versions of non-perturbative quantum gravity. Firstly, we report a novel statistical mechanics in which a class of evolutionary maps act on trivalent spin network in randomly chosen initial states and give rise to Self-organized Criticality. The result of continuously applying these maps indicate an expansion in the space-time area associated. Secondly, a previously unknown statistical mechanics in quantum gravity is introduced in the framework of two dimensional Causal Dynamical Triangulations. This provides us a useful and new tools to understand this quantum gravity in terms of effective spins. This study reveals a correspondence between the statistics of Anti-ferromagnetic systems and Causal Dynamical quantum gravity. More importantly, it provides a basis for studying anti-ferromagnetic systems in a background independent way. Thirdly, two novel properties of area operator in Loop Quantum Gravity are reported: 1) the generic degeneracy and 2) the ladder symmetry. These were not known previously for years. The first one indicates that corresponding to any eigenvalue of area operator in loop quantum gravity there exists a finite number of degenerate eigenstates. This degeneracy is shown to be one way for the explanation of black hole entropy in a microscopic way. More importantly, we reproduce Bekenstein-Hawking entropy of black hole by comparing the minimal energy of a decaying frequency from a loop quantum black hole and the extracted energy from a perturbed black hole in the highly damping mode. This consistency reveals a treasure model for describing a black hole in loop quantum gravity that does nor suffer from the restrictions of an isolated horizon. The second property indicates there exists a ladder symmetry unexpectedly in the complete spectrum of area eigenvalues. This symmetry suggests the eigenvalues of area could be classified into different evenly spaced subsets, each called a `generation.' All generations are evenly spaced; but the gap between the levels in any every generation is unique. One application of the two new properties of area operator have been considered here for introducing a generalized picture of horizon whose area cells are not restricted to the subset considered in quantum isolated horizon theory. Instead, the area cells accepts values from the complete spectrum. Such horizon in the presence of all elements of diffeomorphism group contains a number of degrees of freedom independently from the bulk freedom whose logarithm scales with the horizon area. Note that this is not the case in quantum isolated horizon when the complete elements of diffeomorphism applies. Finally, we use a simple statistical method in which no pre-assumption is made for the essence of the energy quanta radiated from the hole. We derive the effects of the black hole horizon fluctuations and reveal a new phenomenon called "quantum amplification effects" affecting black hole radiation. This effect causes unexpectedly a few un-blended radiance modes manifested in spectrum as discrete brightest lines. The frequency of these modes scales with the mass of black hole. This modification to Hawking's radiation indicates a window at which loop quantum gravity can be observationally tested at least for primordial black holes.