The Influence of Emotional Context on Memory for Faces 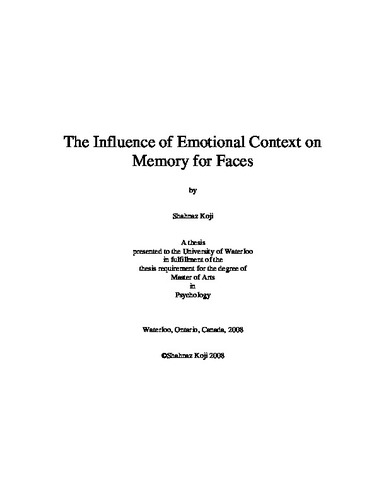 The present thesis investigates whether the emotional background (context) in which a neutral face is viewed changes one’s memory for that face. In Experiment 1, neutral faces were overlaid centrally onto emotional (positive or negative) or neutral background scenes, and recognition memory for faces was assessed. Memory for faces initially encoded in negative contexts was boosted relative to memory for faces initially encoded in neutral contexts. Further investigation was necessary to reveal the mechanism behind the influence that emotional context had on memory for faces. In Experiments 2 and 3 the spotlight theory of attention was tested to examine whether visual attention was mediating the memory effect. The spotlight theory of attention postulates that positive affective states broaden one’s scope of attention, while negative affective states narrow one’s scope of attention (Easterbrook, 1959; Derryberry & Tucker, 1994). According to this theory, the negative contexts may have narrowed attentional scope and therefore led to a richer processing of the face which happened to be presented centrally in Experiment 1, leading to boosted recognition of these faces. To test whether the varying emotional contexts did indeed shift attentional scope, Experiment 2 was designed in which neutral faces were presented once again in positive, negative or neutral contexts, however location of face presentation was peripheral rather than central. Results revealed a loss of the memory boost, for faces paired with negative contexts, reported in Experiment 1. Experiment 3 was designed to test the spotlight theory of attention using an intermixed design in which faces were presented either centrally or peripherally, randomly across trials, in emotional and neutral background scenes. In this experiment, faces were better remembered when they were viewed peripherally in positive, relative to neutral, contexts at time of study. Experiment 4 was designed to assess the validity of the spotlight theory in accounting for how emotional scenes change visual attention, by examining how performance on a flanker task differed when emotionally positive or negative scenes were presented centrally. Results suggest that positive scenes broaden the spotlight of attention, relative to negatives ones. In summary, emotional contexts lead to a boost in memory for faces paired with negative information, and this effect may be due to shifts in attention varied by the valence of the context.