Effects of a bacterial ACC deaminase on plant growth-promotion 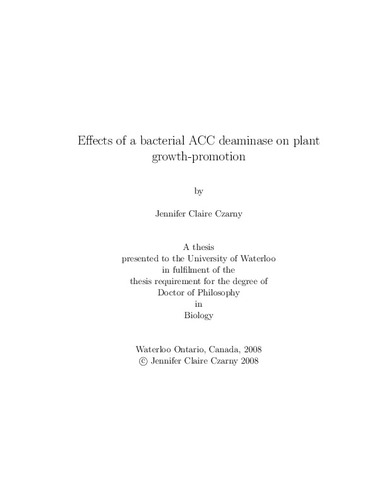 Plants often live in association with growth-promoting bacteria, which provide them with several benefits. One such benefit is the lowering of plant ethylene levels through the action of the bacterial enzyme 1-aminocyclopropane-1-carboxylic acid (ACC) deaminase that cleaves the immediate biosynthetic precursor of ethylene, ACC. The plant hormone ethylene is responsible for many aspects of plant growth and development but under stressful conditions ethylene exacerbates stress symptoms. The ACC deaminase-containing bacterium Pseudomonas putida UW4, isolated from the rhizosphere of reeds, is a potent plant growth-promoting strain and as such was used, along with an ACC deaminase minus mutant of this strain, to study the role of ACC deaminase in plant growth-promotion. Also, transgenic plants expressing a bacterial ACC deaminase gene were used to study the role of this enzyme in plant growth and stress tolerance in the presence and absence of nickel. Transcriptional changes occurring within plant tissues were investigated with the use of an Arabidopsis oligonucleotide microarray. The results showed that transcription of genes involved in hormone regulation, secondary metabolism and the stress response changed in all treatments. In particular, the presence of ACC deaminase caused genes for auxin response factors to be up-regulated in plant tissues suggesting a de-repression of auxin signaling in the absence of high levels of ethylene. Also, transgenic plants had longer roots and grew faster than the non-transformed plants and genes involved in the stress response and secondary metabolism were up-regulated. Plants inoculated with bacteria had lower levels of secondary metabolism gene expression and slightly higher stress response gene expression than uninoculated plants. Yet, inoculation with the ACC deaminase-expressing bacterium caused less up-regulation of plant genes involved in stress and defense responses and the down-regulation of genes involved in nitrogen metabolism in comparison to plants inoculated with the ACC deaminase minus mutant. Nickel stress caused the down-regulation of genes involved in photosynthesis and carbon fixation and the up-regulation of genes involved in stress responses, and amino acid and lipid breakdown suggesting energy starvation. When transgenic plants expressing ACC deaminase in the roots were exposed to nickel stress, plant stress symptoms were significantly lower and biomass was significantly higher suggesting that lowering the level of ethylene relieved many of the stress symptoms. In fact, genes involved in photosynthesis, secondary metabolism and nitrate assimilation were up-regulated in transgenic plants compared with non-transformed plants in the presence of nickel, suggesting that ACC deaminase is effective at reducing the severe effects of this metal stress.