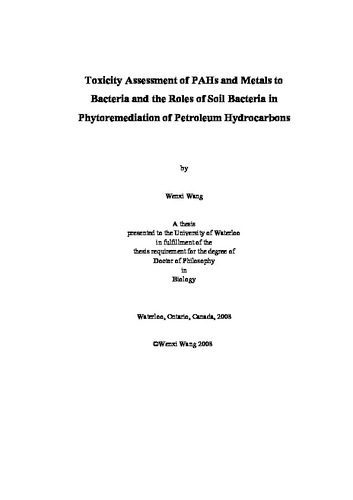 Petroleum hydrocarbons (PHCs) are a class of ubiquitous contaminants in the environment. PHCs impact to soil and water occur at well sites, refineries, service stations, and other facilities. Petroleum processing and consumption of petroleum products lead to the further release of other PHC pollutants such as Polycyclic Aromatic Hydrocarbons (PAHs) as well as metals. PHCs are causing serious environmental problems due to their widespread use. Hence, the central theme of this thesis addresses hydrocarbon pollutants and co-contaminating metals: their occurrence in environment, their mechanism of toxicity and their remediation via biological processes. This thesis is divided into two parts including seven chapters. The first part includes chapters 2, 3 and 4. Using bioluminescent bacterium Vibrio fischeri, a widely used bioindacator in environmental toxicology, the individual and mixture toxicities of phenanthrenequinone (PHQ), an oxyPAH, combined with copper and cadmium were assessed. PHQ is a main photoproduct of phenanthrene (PHE), a dominant PAH in the environment. Results showed that PHQ is much more toxic than its parent PAH. PHQ, alone or as mixtures with Cu and Cd, damages bacterial cells via enhancing production of reactive oxygen species (ROS). The mixture toxicity of Cu/PHQ was found to be dependent on the ratio of each chemical in the mixture. Two up-regulated genes, protein translocase subunit SecY gene and putative polysaccharide export protein YccZ precursor, were identified to be possibly response to PHQ exposure. Both genes are related to the detoxification of ROS. The second part of this thesis includes chapters 5, 6, and 7. Culture-dependent and -independent approaches were employed to evaluate the roles of bacteria as biodegraders or/and plant growth promoters during phytoremediation at a petroleum land farm (PLF) with a PHC concentration of ~130 g Kg-1. A plant growth promoting rhizobacteria (PGPR) enhanced phytoremediation system (PEP) was applied to remediate PLF soil. PEP promotes plant growth to establish dense vegetative cover. Results of both culturing and molecular methods showed that the enhanced populations and activities of soil microbes due to vigorous plant growth is a key factor in the success of PEP. Introduced PGPR could quickly establish significant populations by utilizing root exudates and dominate the PGPR population on seed coat and root surfaces at the early seedling stage of plant development, and thus modestly affected bacterial community structures at this time; thereafter, with plant growth, the effect of seed treatment on soil microbial community was masked by enhanced indigeneous microbial population. Therefore, the introduced PGPR did not exert significant influence on the indigenous microbial ecosystem. It does dramatically improve plant growth and PHC remediation. Thus, the PEP should be considered as an environmentally safe and effective approach for removing PHCs from impacted soils.

Wenxi Wang (2008). Toxicity Assessment of PAHs and Metals to Bacteria and the Roles of Soil Bacteria in Phytoremediation of Petroleum Hydrocarbons. UWSpace. http://hdl.handle.net/10012/4068