Trade-off between Innovation and Sustainability: Perceptions from Students from Developed and Developing Countries 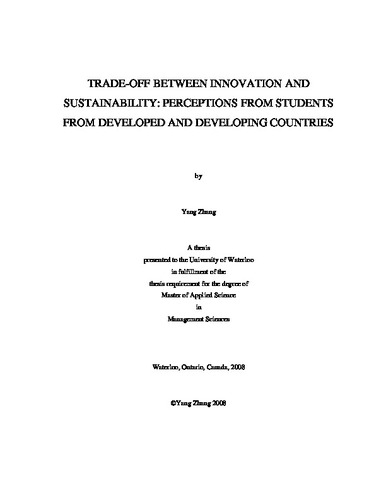 This study investigated the human perception of certain social values to improve national well-being. It focused on the relative importance of two values, innovation and sustainability. Finally, it examined the possibility of a perceived trade-off between these two values by identifying whether a value change occurred among people from developed and developing countries under both constrained (forced-choice) and unconstrained (free-choice) rating conditions. The perceived importance of social values was measured in a survey using an eleven point rating scale. The perceived trade-off and the value change were identified by analyzing rating responses of the survey from test to retest. The analysis found that participants experienced a significant value change from test to retest and participants had different value preference depending on their country type, either developed or developing. This study consisted of two parts. The exploratory pilot study was conducted based on the Management Sciences Student Survey. This survey gathered information about the importance of selected social values from sixteen graduate students in the Department of Management Sciences at the University of Waterloo. The confirmatory main study was conducted using a web-based survey, Global Representative Value Change Survey. It collected information about the importance of the social values from close to three hundred students at the university at both test (Time One) and retest (Time Two). In this way, it enabled the researcher to identify a value change over time that was primarily attributed to a salience manipulation of innovation and sustainability trade-off. With a focus on the trade-off, the results revealed that all participants from developed and developing countries experienced a significant value change under the unconstrained condition, while very few significant value changes took place under the constrained condition. This study implies that people tend to maintain their value consistency and are not inclined to trade-off innovation for sustainability. If these values can co-exist in harmony and without compromise, people are prepared to give due consideration to sustainability, but not at the compromise to innovation. Implications are highlighted for educators, policy makers, and managers of technological innovation and change.