On the dynamics of infectious diseases in non-homogeneous populations 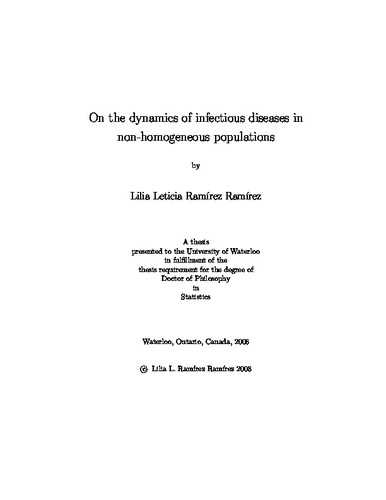 The principal motivations for studying epidemics and their dynamics are understanding the biological characteristics of the epidemic agents and reducing the economical and social costs originating from epidemic outbreaks. The most commonly used epidemic models have important assumptions such as the law of mass action, and the latent and infectious periods being exponentially distributed with xed parameters. Under this kind of suppositions the models are analyzed with well known algorithms as the Euler and Euler-Maruyama, and methodology and results from the theory of Markovian processes. However, these assumptions are selected largely for their analytic convenience and in many cases are far from describing the agent's transmissibility attributes in the population and its biological characteristics in a host. The epidemic models studied here relax two important epidemic assumptions. The first to be relaxed is the one that susceptible individuals are equally likely to acquire the disease. A structure for the kind of individual contacts that can result in the infection transmission is incorporated in the population. This contact structure can be non-homogeneous and it is modeled as a random graph whose edges describe the contacts between individuals. The second assumption that is generalized, is the distribution of the latent and infectious period in the host individuals. This research work allows the latent and infectious period to have a distribution other than the exponential and hence the epidemic process is more general than a Markovian process. As in most stochastic models, the infectious contact is modeled as a random variable with Poisson distribution. However, to introduce the individual variations, the transmission rate is assumed to be a non negative random variable. This work extends the epidemic models suggested by Newman (2002) in two directions. The first, studies the hierarchical networks that have a more complex network structure, involving the interaction of populations. The second direction examines the evolution in times for outbreaks in networks. In this work, results for discrete and continuous time are obtained. The results for the continuous time model considers the infectious process to be a bivariate Markovian process. However, the results for the final outbreaks size and the developed simulation program include the general case were the latent and infectious period can have a distribution other than exponential. This research work also analyze the effect of four control measures in the contact structure, and using the simulation program and Monte Carlo-likelihood methodology, it estimates the parameters for measles and influenza. The results here obtained can be directly applied to study the dynamics of other kind of “agents” such as information and ideas. For example, the dynamics can involve the spread of computer viruses, rumors, eating habits and personal positions regarding a fact or idea.