Animosity, Ambivalence and Co-operation: Manifestations of heterogeneous German Identities in the Kitchener-Waterloo area during and after the Second World War. 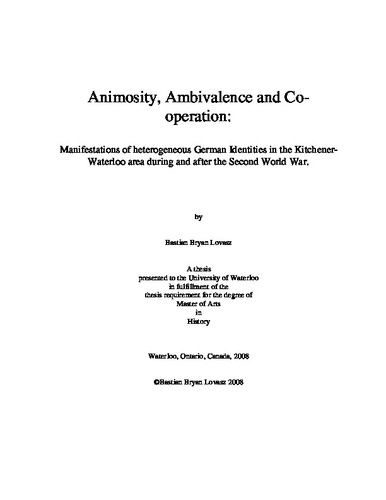 Much has been written about how the city of Berlin, Ontario – long a centre of Germanic industry and culture in Canada –changed its name to Kitchener in 1916 in the face of anti-German sentiments. Studies by Geoffrey Hayes and Ross Fair have particularly identified how a more acceptable form of German identity evolved in Kitchener after 1918, emphasizing the Pennsylvania Mennonite origins of many of the area’s first non-native settlers, instead of the continental German identity of much of the citizenry. But what of the Second World War, and the wave of German immigrants that came to Waterloo Region in its aftermath? Through what means did this community of immigrants establish its identity, and come to terms with the legacy of wartime Germany? How did the German community continue to evolve and react to political and social currents reverberating in Europe? This study addresses these questions by examining a number of episodes in the twentieth century that both celebrated and divided local German communities. Three examples will be discussed to help elucidate the concept of complex German identities in Kitchener-Waterloo. The formation of the Deutsche Bund Canada at the time of the Second World War, the creation of Oktoberfest in Kitchener-Waterloo in the late 1960s, as well as the visit of David Irving to Kitchener in 1992 represent events in the history of the area that lend themselves very naturally to further examination. While German immigrants have historically been regarded as a cohesive community, unified by attributes such as a shared language, it will be argued here based on these three examples, that Germans in Kitchener-Waterloo are comprised of unique groupings of ‘Germans’, whose identities vary depending on attributes such as geographic origin and time frame of emigration.

Bastian Bryan Lovasz (2008). Animosity, Ambivalence and Co-operation: Manifestations of heterogeneous German Identities in the Kitchener-Waterloo area during and after the Second World War.. UWSpace. http://hdl.handle.net/10012/4053