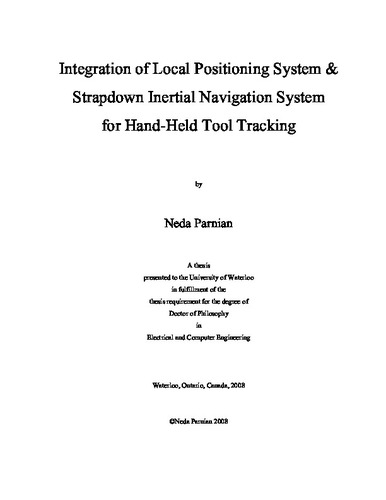 This research concerns the development of a smart sensory system for tracking a hand-held moving device to millimeter accuracy, for slow or nearly static applications over extended periods of time. Since different operators in different applications may use the system, the proposed design should provide the accurate position, orientation, and velocity of the object without relying on the knowledge of its operation and environment, and based purely on the motion that the object experiences. This thesis proposes the design of the integration a low-cost Local Positioning System (LPS) and a low-cost StrapDown Inertial Navigation System (SDINS) with the association of the modified EKF to determine 3D position and 3D orientation of a hand-held tool within a required accuracy. A hybrid LPS/SDINS combines and complements the best features of two different navigation systems, providing a unique solution to track and localize a moving object more precisely. SDINS provides continuous estimates of all components of a motion, but SDINS loses its accuracy over time because of inertial sensors drift and inherent noise. LPS has the advantage that it can possibly get absolute position and velocity independent of operation time; however, it is not highly robust, is computationally quite expensive, and exhibits low measurement rate. This research consists of three major parts: developing a multi-camera vision system as a reliable and cost-effective LPS, developing a SDINS for a hand-held tool, and developing a Kalman filter for sensor fusion. Developing the multi-camera vision system includes mounting the cameras around the workspace, calibrating the cameras, capturing images, applying image processing algorithms and features extraction for every single frame from each camera, and estimating the 3D position from 2D images. In this research, the specific configuration for setting up the multi-camera vision system is proposed to reduce the loss of line of sight as much as possible. The number of cameras, the position of the cameras with respect to each other, and the position and the orientation of the cameras with respect to the center of the world coordinate system are the crucial characteristics in this configuration. The proposed multi-camera vision system is implemented by employing four CCD cameras which are fixed in the navigation frame and their lenses placed on semicircle. All cameras are connected to a PC through the frame grabber, which includes four parallel video channels and is able to capture images from four cameras simultaneously. As a result of this arrangement, a wide circular field of view is initiated with less loss of line-of-sight. However, the calibration is more difficult than a monocular or stereo vision system. The calibration of the multi-camera vision system includes the precise camera modeling, single camera calibration for each camera, stereo camera calibration for each two neighboring cameras, defining a unique world coordinate system, and finding the transformation from each camera frame to the world coordinate system. Aside from the calibration procedure, digital image processing is required to be applied into the images captured by all four cameras in order to localize the tool tip. In this research, the digital image processing includes image enhancement, edge detection, boundary detection, and morphologic operations. After detecting the tool tip in each image captured by each camera, triangulation procedure and optimization algorithm are applied in order to find its 3D position with respect to the known navigation frame. In the SDINS, inertial sensors are mounted rigidly and directly to the body of the tracking object and the inertial measurements are transformed computationally to the known navigation frame. Usually, three gyros and three accelerometers, or a three-axis gyro and a three-axis accelerometer are used for implementing SDINS. The inertial sensors are typically integrated in an inertial measurement unit (IMU). IMUs commonly suffer from bias drift, scale-factor error owing to non-linearity and temperature changes, and misalignment as a result of minor manufacturing defects. Since all these errors lead to SDINS drift in position and orientation, a precise calibration procedure is required to compensate for these errors. The precision of the SDINS depends not only on the accuracy of calibration parameters but also on the common motion-dependent errors. The common motion-dependent errors refer to the errors caused by vibration, coning motion, sculling, and rotational motion. Since inertial sensors provide the full range of heading changes, turn rates, and applied forces that the object is experiencing along its movement, accurate 3D kinematics equations are developed to compensate for the common motion-dependent errors. Therefore, finding the complete knowledge of the motion and orientation of the tool tip requires significant computational complexity and challenges relating to resolution of specific forces, attitude computation, gravity compensation, and corrections for common motion-dependent errors. The Kalman filter technique is a powerful method for improving the output estimation and reducing the effect of the sensor drift. In this research, the modified EKF is proposed to reduce the error of position estimation. The proposed multi-camera vision system data with cooperation of the modified EKF assists the SDINS to deal with the drift problem. This configuration guarantees the real-time position and orientation tracking of the instrument. As a result of the proposed Kalman filter, the effect of the gravitational force in the state-space model will be removed and the error which results from inaccurate gravitational force is eliminated. In addition, the resulting position is smooth and ripple-free. The experimental results of the hybrid vision/SDINS design show that the position error of the tool tip in all directions is about one millimeter RMS. If the sampling rate of the vision system decreases from 20 fps to 5 fps, the errors are still acceptable for many applications.