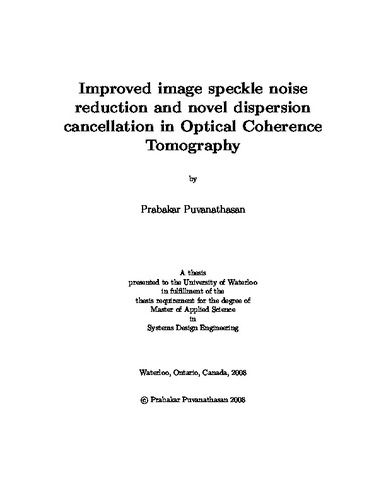 Optical coherence tomography (OCT) is an innovative modern biomedical imaging technology that allows in-vivo, non-invasive imaging of biological tissues. At present, some of the major challenges in OCT include the need for fast data acquisition system for probing fast developing biochemical processes in biological tissue, for image processing algorithms to reduce speckle noise and to remove motion artefacts, and for dispersion compensation to improve axial resolution and image contrast. To address the need for fast data acquisition, a novel, high speed (47,000 A-scans/s), ultrahigh axial resolution (3.3μm) Fourier Domain Optical Coherence Tomography (FD-OCT) system in the 1060nm wavelength region has been built at the University of Waterloo. The system provides 3.3μm image resolution in biological tissue and maximum sensitivity of 110 dB. Retinal tomograms acquired in-vivo from a human volunteer and a rat animal model show clear visualization of all intra-retinal layers and increased penetration into the choroid. OCT is based on low-coherence light interferometry. Thus, image quality is dependent on the spatial and temporal coherence properties of the optical waves back-scattered from the imaged object. Due to the coherent nature of light, OCT images are contaminated with speckle noise. Two novel speckle noise reduction algorithms based on interval type II fuzzy sets has been developed to improve the quality of the OCT images. One algorithm is a combination of anisotropic diffusion and interval type II fuzzy system while the other algorithm is based on soft thresholding wavelet coefficients using interval type II fuzzy system. Application of these novel algorithms to Cameraman test image corrupted with speckle noise (variance=0.1) resulted in a root mean square error (RMSE) of 0.07 for both fuzzy anisotropic diffusion and fuzzy wavelet algorithms. This value is less compared to the results obtained for Wiener (RMSE=0.09), adaptive Lee (RMSE=0.09), and median (RMSE=0.12) filters. Applying the algorithms to optical coherence tomograms acquired in-vivo from a human finger-tip show reduction in the speckle noise and image SNR improvement of ~13dB for fuzzy anisotropic diffusion and ~11db for fuzzy wavelet. Comparison with the Wiener (SNR improvement of ~3dB), adaptive Lee (SNR improvement of ~5dB) and median (SNR improvement of ~5dB) filters, applied to the same images, demonstrates the better performance of the fuzzy type II algorithms in terms of image metrics improvement. Micrometer scale OCT image resolution is obtained via use of broad bandwidth light sources. However, the large spectral bandwidth of the imaging beam results in broadening of the OCT interferogram because of the dispersive properties of the imaged objects. This broadening causes deterioration of the axial resolution and as well as loss of contrast in OCT images. A novel even-order dispersion cancellation interferometry via a linear, classical interferometer has been developed which can be further expanded to dispersion canceled OCT.