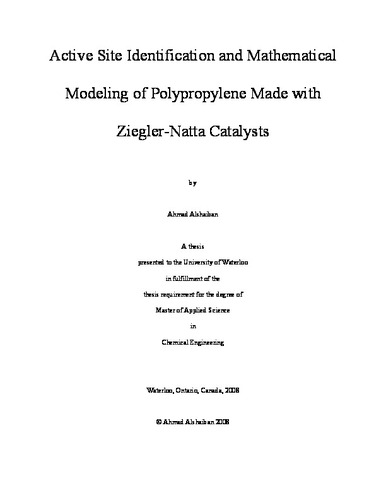 Heterogeneous Ziegler-Natta catalysts are responsible for most of the industrial production of polyethylene and polypropylene. A unique feature of these catalysts is the presence of more than one active site type, leading to the production of polyolefins with broad distributions of molecular weight (MWD), chemical composition (CCD) and stereoregularity. These distributions influence strongly the mechanical and rheological properties of polyolefins and are ultimately responsible for their performance and final applications. The inherent complexity of multiple-site-type heterogeneous Ziegler-Natta catalysts, where mass and heat transfer limitations are combined with a rather complex chemistry of site activation in the presence of internal and external donors, plus other phenomena such as comonomer rate enhancement, hydrogen effects, and poisoning, makes the fundamental study of these systems a very challenging proposition. In this research project, new mathematical models for the steady-state and dynamic simulation of propylene polymerization with Ziegler-Natta heterogeneous catalysts have been developed. Two different modeling techniques were compared (population balances/method of moments and Monte Carlo simulation) and a new mechanistic step (site transformation by electron donors) were simulated for the first time. Finally, polypropylene tacticity sequence length distributions were also simulated. The model techniques showed a good agreement in terms of polymer properties such as molecular weights and tacticity distribution. Furthermore, the Monte Carlo simulation technique allowed us to have the full molecular weight and tacticity distributions. As a result, the 13C NMR analytical technique was simulated and predicted.