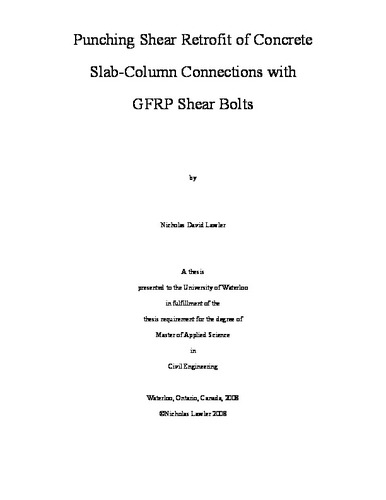 Over the life span of a structure it may become necessary to retrofit, or strengthen certain components or elements. This may be due to construction errors, changes in use and occupancy, or changes due to material deterioration or damage. Slab-column connections in flat slab structures might need to be strengthened for punching shear. Using steel shear bolts to strengthen connections for punching shear is a new technique used for retrofit that was developed at the University of Waterloo. If the retrofitted part of the structure is exposed to the atmosphere, or to chemicals such as deicing salts, the steel can corrode, thus furthering to damage the structure. Non-corrosive materials that can replace the steel shear bolts can be a good practical alternative to steel. Reported in this thesis are the results of research on the development and use of non-corrosive shear bolts for reinforced concrete interior slab-column connections. Externally applied shear reinforcing bolts provide the punching shear reinforcement strength, while allowing the flexibility and ease of installation of an external application after construction. By providing a bearing area against both sides of the slab surface, the formation of punching shear cracks can be restrained, and the connection can become strengthened against punching shear failure. Three different types of non-corrosive shear bolts were developed and tested. The first was an off-the-shelf glass fiber reinforced polymer (GFRP) bolt / nut product. The two others used two different GFRP core rods with aluminum fittings crimped to their ends. A total of six specimens were tested, four were tested under an increasing static load, while two were tested with an unbalanced pseudo-dynamic lateral load. All six specimens were designed to fail in punching shear before reaching their flexural capacity. The results are compared against previous test results of specimens both unreinforced and reinforced with steel shear bolts to determine their effectiveness. From the test results it was found that the GFRP shear bolts did strengthen the connections for punching shear. The GFRP nut and bolt did not strengthen the connection, and, in fact, decreased its overall strength when compared to the unreinforced specimen. The presence of the GFRP shear bolts also increased the connection ductility and the deflection capability. In the pseudo-dynamic tests the GFRP shear bolts significantly increased the amount of energy dissipated by the connection under reverse cyclic loading. The results of the testing appeared to be depended on the proper application of the crimping technique to place the bolts in the slab.