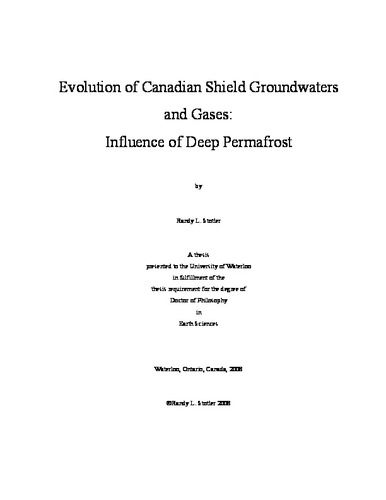 Numerous glacial advances over the past 2 million years have covered the entire Canadian and Fennoscandian Shield outcrop. During glacial advance and retreat, permafrost is expected to form in front of the glacier. The question of how permafrost and freezing impact the formation and evolution of brines in natural systems may be vital to understanding the chemistry of groundwater in crystalline rocks. Investigations of groundwater conditions beneath thick permafrost can provide valuable information that can be applied to assessing safety of deep, underground nuclear waste repositories and understanding analogues to potential life-bearing zones on Mars. However, very little scientific investigation of cryogenic processes and hydrogeology deep within crystalline systems has been published. The purpose of this research is to evaluate the impacts of thick permafrost (>300m) formation on groundwater chemical and flow system evolution in the crystalline rock environment over geologic timescales. A field investigation was conducted at the Lupin Mine in Nunavut, Canada, to characterize the physical and hydrogeochemical conditions within and beneath a thick permafrost layer. Taliks, or unfrozen channels within the permafrost, are found beneath large lakes in the field area, and provide potential hydraulic connections through the permafrost. Rock matrix waters are dilute and do not appear to affect groundwater salinity. Permafrost waters are Na-Cl and Na-Cl-SO4 type, and have been contaminated with chloride and nitrate by mining activities. Sulfide oxidation in the permafrost may be naturally occurring or is enhanced by mining activities. Basal permafrost waters (550 to 570 mbgs) are variably affected by mining. The less contaminated basal waters have medium sulfate concentrations and are Ca-Na dominated. This is similar to deeper, uncontaminated subpermafrost waters, which are Ca-Na-Cl or Na-Ca-Cl type with a wide range of salinities (2.6 to 40 g•L-1). The lower salinity subpermafrost waters are attributed to dissociation of methane hydrate and drawdown of dilute talik waters by the hydraulic gradient created by mine dewatering. This investigation was unable to determine the influence of talik waters to the subpermafrost zone in undisturbed conditions. Pressures are also highly variable, and do not correlate with salinity. Fracture infillings are scarce and calcite δ18O and δ13C values have a large range. Microthermometry indicates a large range in salinities and homogenization temperatures as well, indicative of a boiling system. In situ freezing of fluids and methane hydrate formation may have concentrated the remaining fluids. Field activities at the Lupin mine also provided an opportunity to study the nature of gases within crystalline rocks in a permafrost environment. Gases were generally methane-dominated (64 to 87), with methane δ13C and δ2H values varying between -56 and -42‰ VPDB and -349 to -181 ‰ VSMOW, respectively. The gases sampled within the Lupin mine have unique ranges of chemical and isotopic compositions compared with other Canadian and Fennoscandian Shield gases. The gases may be of thermogenic origin, mixed with some bacteriogenic gas. The generally low δ2H-CH4 ratios are somewhat problematic to this interpretation, but the geologic history of the site, a metaturbidite sequence, supports a thermogenic gas origin. The presence of gas hydrate in the rock surrounding Lupin was inferred, based on temperature measurements and hydrostatic pressures. Evidence also suggests fractures near the mine have been depressurized, likely due to mine de-watering, resulting in dissipation of methane hydrate near the mine. Modeling results indicate methane hydrates were stable throughout the Quaternary glacial-interglacial cycles, potentially limiting subglacial recharge. The effects of deep permafrost formation and dissipation during the Pleistocene glacial/interglacial cycle to deep groundwaters in the Canadian Shield were also investigated by compiling data from thirty-nine sites at twenty-four locations across the Canadian Shield. Impacts due to glacial meltwater recharge and surficial cryogenic concentration of fluids, which had been previously considered by others, and in situ freeze-out effects due to ice and/or methane hydrate formation were considered. At some Canadian Shield sites, there are indications that fresh, brackish, and saline groundwaters have been affected by one of these processes, but the data were not sufficient to differentiate between mixed, intruded glacial meltwaters, or residual waters resulting from either permafrost or methane hydrate formation. Physical and geochemical data do not support the cryogenic formation of Canadian Shield brines from seawater in glacial marginal troughs. The origin and evolution of Canadian and Fennoscandian Shield brines was explored with a survey of chlorine and bromine stable isotope ratios. The δ37Cl and δ81Br isotopic ratios varied between -0.78 ‰ and 1.52 ‰ (SMOC) and 0.01 ‰ and 1.52 ‰ (SMOB), respectively. Variability of chlorine and bromine isotope ratios decreases with increasing depth. Fennoscandian Shield groundwaters tend to be more enriched than Canadian Shield groundwaters for both 37Cl and 81Br. Other sources and processes which may affect δ37Cl and δ81Br composition are also explored. Primary processes such as magmatic and/or hydrothermal activity are thought to be responsible for the isotopic composition of the most concentrated fluids at each site. Positive correlations between δ81Br, and δ37Cl with δ2H-CH4 and δ13C-CH4 were noted. At this time the cause of the relationship is unclear, and may be a result of changing redox, pH, temperature, and/or pressure conditions during hydrothermal, metamorphic, or volcanogenic processes. The data suggest solute sources and fluid evolution at individual sites would be better constrained utilizing a multi-tracer investigation of δ37Cl, δ81Br, and 87Sr/86Sr ratios comparing fluids, rocks, and fracture filling minerals (including fluid inclusions).