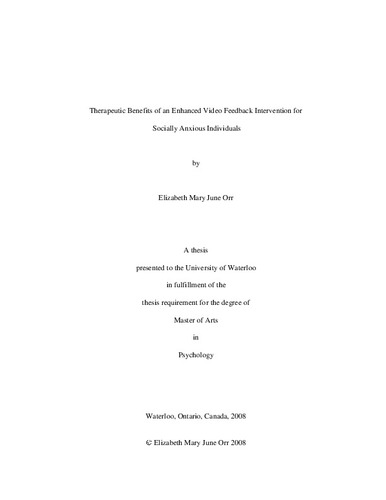 Video feedback (VF) has been widely integrated into cognitive behavioural treatment protocols for socially anxious individuals due to its presumed efficacy in improving negative self-perception and reducing underestimations of performance. However, studies examining VF in social anxiety reveal, surprisingly, that correction of overly negative self-perception does not unequivocally facilitate anxiety reduction during subsequent social interactions. In the current study, we examined whether VF could be optimized to facilitate social anxiety reduction through the inclusion of a post-VF encoding manipulation. The manipulation was designed to enable individuals to internalize the positive information received from VF by enhancing the depth at which they processed the self-exposure information. Forty-three individuals high in social anxiety and verbal communication anxiety were randomly assigned to one of the following three conditions: A) VF + Manipulation; B) VF + No Manipulation; and C) No VF. Results revealed that VF + Manipulation led to significant cognitive changes pertaining to self-efficacy and internal attributions of performance relative to the other two conditions. Unexpectedly, both VF conditions were equally efficacious in the facilitation of anxiety reduction relative to the No VF condition. Results are discussed in the context of cognitive behavioural models of anxiety and the mechanisms of exposure-based learning.