Preparation, Characterization and Performance of Poly(vinyl alcohol) based Membranes for Pervaporation Dehydration of Alcohols 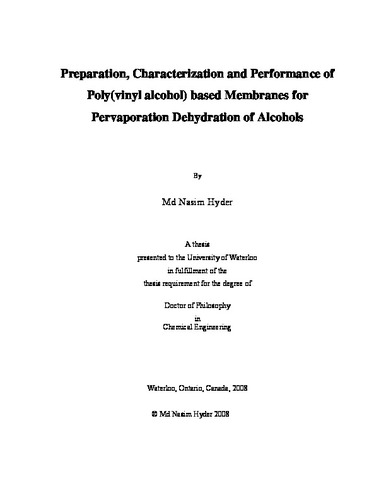 Pervaporation (PV), a non-porous membrane separation process, is gaining considerable attention for solvent separation in a variety of industries ranging from chemical to food and pharmaceutical to petrochemicals. The most successful application has been the dehydration of organic liquids, for which hydrophilic membranes are used. However, during pervaporation, excessive affinity of water towards hydrophilic membranes leads to undesirable swelling (water absorption) of the membrane matrix. To control swelling, often hydrophilic membranes are crosslinked to modify physicochemical (surface and bulk) properties. Since the transport of species in pervaporation is governed by sorption (affected by surface and bulk properties) and diffusion (affected by bulk properties), it is essential to study the effect of crosslinking on the surface and bulk physicochemical properties and their effects on separation performance. This thesis focuses on the effect of crosslinking on the physicochemical properties (e.g., crystallinity, hydrophilicity, surface roughness) of hydrophilic polymeric membranes and their dehydration performance alcohol-water mixtures. Poly(vinyl alcohol), PVA was used as the base polymer to prepare membranes with various morphologies such as homogeneous, blended (with Chitosan, CS) and composite (with poly(sulfone), PSf) structures. Before applying the crosslinked membranes for the PV dehydration of alcohols, the physicochemical characterization were carried out using Attenuated Total Reflection-Fourier Transform Infrared Spectroscopy (ATR-FTIR), X-Ray Diffraction (XRD), Differential Scanning Calorimetry (DSC), Scanning Electron Microscopy (SEM), Atomic Force Microscopy (AFM), tensile testing, contact angle and swelling experiments. The crosslinked membranes showed an increase in surface hydrophobicity from the contact angle measurements as compared to the uncrosslinked membranes. AFM surface topography showed that the membrane surfaces have nodular structures and are rough at the nanometer scale and affected by the crosslinking conditions such as concentration and reaction time. Surface hydrophobicity and roughness was found to increase with increasing degree of crosslinking. DSC measurements showed an increase in melting temperature of the polymer membranes after crosslinking. For the PV dehydration of ethanol, a decrease in flux and an increase in selectivity were observed with increase in the degree of crosslinking. Effects of membrane thickness (of PVA layer) for crosslinked PVA-PSf composite membranes were studied on PV dehydration of ethanol. Total flux and selectivity were statistically analyzed as a function of the membrane thickness. In general, the outcome agrees with the solution-diffusion (S-D) theory: the total flux was found to be significantly affected by the PVA layer thickness, while the selectivity remains nearly unaffected. Using the S-D theory, the mass transfer resistance of the selective layers was calculated and found to increase with thickness. The relatively small change observed for selectivity has been related to the crosslinking of the PVA layer that increases the surface hydrophobicity of the membrane. Chitosan-Poly(vinyl alcohol), or CS-PVA, blended membranes were prepared by varying the blending ratio to control membrane crystallinity and its effect on the PV dehydration of ethylene glycol. The blended membranes were crosslinked interfacially with trimesoyl chloride (TMC)/hexane. The crystallinity of the membrane was found to decrease with increasing CS wt% in the blend. Although the crosslinked CS-PVA blend membranes showed improved mechanical strength, they became less flexible as detected in tensile testing. The resulting crosslinked CS-PVA blended membranes showed high flux and selectivity simultaneously, for 70-80wt% CS in the blend. The effect of feed flow-rate was studied to find the presence of concentration polarization for 90wt% EG in feed mixture as well. The crosslinked blend membrane with 75wt% CS showed a highest total flux of 0.46 kg/m2/h and highest selectivity of 663 when operating at 70oC with 90wt% EG in the feed mixture. Effects of crosslinking concentration and reaction time of trimesoyl chloride (TMC) were studied on poly(vinyl alcohol)-poly(sulfone) or PVA-PSf composite membranes. Results showed a consistent trend of changes in the physicochemical properties: the degree of crosslinking, crystallinity, surface roughness, hydrophilicity and swelling degree all decrease with increasing crosslinking agent (TMC) concentration and reaction time. The crosslinked membrane performance was assessed with PV dehydration of ethylene glycol-water mixtures at a range of concentrations (30 to 90wt% EG). The total flux of permeation was found to decrease, while the selectivity to increase, with increasing TMC concentration and reaction time. The decrease in flux was most prominent at low EG concentrations in the feed mixtures. A central composite rotatable design (CCRD) of response surface methodology was used to analyze PV dehydration performance of crosslinked poly(vinyl alcohol) (PVA) membranes. Regression models were developed for the flux and selectivity as a function of operating conditions such as, temperature, feed alcohol concentration, and flow-rate. Dehydration experiments were performed on two different alcohol-water systems: isopropanol-water (IPA-water) and ethanol-water (Et-water) mixtures around the azeotrope concentrations. Judged by the lack-of-fit criterion, the analysis of variance (ANOVA) showed the regression model to be adequate. The predicted flux and selectivity from the regression models were presented in 3-D surface plots over the whole ranges of operating variables. For both alcohol-water systems, quadratic effect of temperature and feed alcohol concentration showed significant (p < 0.0001) influence on the flux and selectivity. A strong interaction effect of temperature and concentration was observed on the selectivity for the Et-water system. For the dehydration of azeotropic IPA-water mixture (87.5wt% IPA), the optimized dehydration variables were found to be 50.5oC and 93.7 L/hr for temperature and flow-rate, respectively. On the other hand for azeotropic Et-water mixture (95.5wt% Et), the optimized temperature and flow-rate were found to be 57oC and 89.2 L/hr, respectively. Compared with experiments performed at optimized temperature and feed flow-rate, the predicted flux and selectivity of the azeotropic mixtures showed errors to be within 3-6 %.