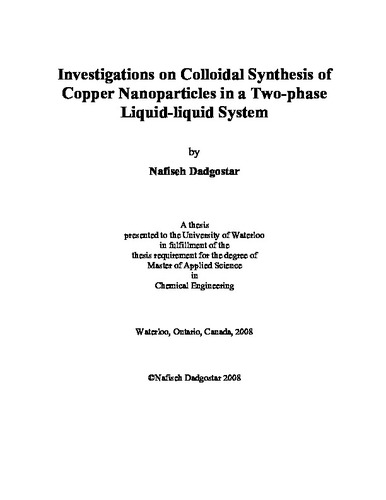 Synthesis of copper nanoparticles by a colloidal recipe in a two-phase liquid-liquid mixture (toluene/water) was investigated. The synthesis recipe used in this work was originally applied for the fabrication of alkylamine-capped gold nanoparticles. This method involves transferring metal cations from the aqueous layer to the organic one by the phase transfer reagent, tetraoctylammonium bromide, followed by reduction with sodium borohydride in the presence of oleylamine, which was used as the stabilising ligand. Several modifications were made to the original recipe to produce copper nanoparticles with high degrees of purity and stability. These particles are potentially applicable in various industries and are considered as an alternative for expensive metal nanoparticles, such as gold, silver, and platinum. Due to the high tendency of copper for oxidation, all of the synthesis experiments were carried out in a glove box under the flow of an inert gas (N2 or Ar). The concentration of Cl− was initially increased to form anionic complexes of copper that could later react with the cationic phase transfer reagent. This modification was followed to enhance the efficiency of the transferring step; however, the presence of anion, Cl−, at the surface of the synthesized particles was reported to change their properties; thus, increasing chloride concentration was eventually ignored. The decanting of two phases prior to the reduction step was also investigated to examine whether the site of the reduction reaction could be limited to cores of reverse micelles. The aggregated nanoparticles, which were fabricated by reducing the decanted organic phase, were heated after the synthesis at 150°C for 30 minutes to obtain a light green solution of nanoparticles. However, further characterization was not possible due to the hydrocarbon impurities. Dodecane, which was employed as the solvent for post-synthesis heating procedure, is believed to result in these impurities. Further investigation is required to explain the mechanism by which post-synthesis heating facilitates nanoparticle stabilization. Duplication of the original recipe for copper in an inert atmosphere resulted in a mixture of assembled layers of separated copper nanocrystals with an average size of ~ 5 nm and aggregated clusters of cubic copper (I) oxide nanoparticles. The possible mechanism for this division is believed to be the presence of the phase transfer reagent capped to the surface of a portion of synthesized particles leading to their metastability.