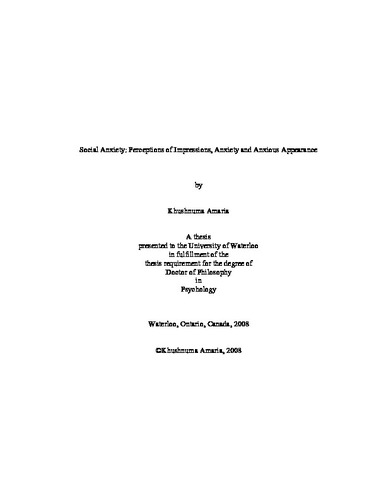 Schlenker and Leary (1982) and Clark and Wells (1995) each propose two highly influential models of social anxiety disorder with important implications for theory and treatment. In the current study, overlapping and competing cognitive components of these theories were tested with a focus on understanding the socially anxious (SA) individual’s mental representation of self, and its relation to the experience of anxiety in a social situation. Unacquainted pairs of non-socially anxious individuals (n = 61 pairs) and mixed pairs of highly SA and non-socially anxious (NSA) individuals (n = 101 pairs) participated in a “get acquainted” and a structured problem-solving task. All participants rated both their expectations for making specific impressions as well as the importance of making those impressions. All participants also rated how anxious they felt, how anxious they thought they appeared, and how anxious their partners appeared during the interaction. While all participants believed it was important to make a positive impression, SA individuals expected they would make an overall less positive impression than NSA participants. All individuals reported increased anxiety when ratings of impression importance were higher than expectation ratings (test of Schlenker and Leary’s [1982] model). While self-ratings of anxious appearance were similarly influenced by interoceptive information for both SA and NSA individuals (test of Clark and Wells’ [1995] model), for NSA individuals who had a high tendency to attend to publicly observable aspects of their body, the relation between arousal and self-reported appearance was particularly robust in comparison with that for SA individuals. SA individuals as a group were rated by partners as appearing more anxious than NSA participants. Overall, NSA participants’ ratings of a desire for future interaction with SA and NSA partners were comparable. Implications for theory, measurement concerns of key anxiety constructs, treatment implications and need for further investigation are discussed.