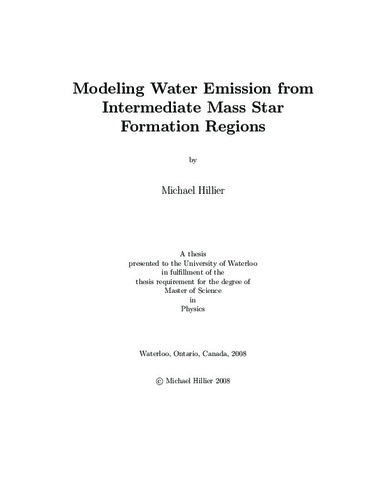 In this research water emission is modeled from intermediate mass star formations regions placed at 1 kpc. Nine models are created to describe these regions of varying source luminosity ($L=100,500,$ and $1000L_{\odot}$) and protostellar envelope mass ($M=10,100,$ and $500M_{\odot}$). For each model, an intermediate mass class 0 protostar is centrally embedded in a spherically symmetry static protostellar envelope. Radiation transfered through these regions is calculated using the program RATRAN that applies an accelerated Monte Carlo method to obtain level population profiles of water. The level populations are used to determine the emission distribution of water from the regions by using a ray tracing method. Strong correlations between line ratios, integrated intensities and source luminosity are found. Larger envelope masses resulted in more mass going in the outer envelope where the water is frozen and does not contribute to the water emission and absorption. Line strengths, ratios, and integrated intensities for all the spectral lines of water within Herschel's observation range are tabulated.