Does NME even know what a music blog is?: The Rhetoric and Social Meaning of MP3 Blogs 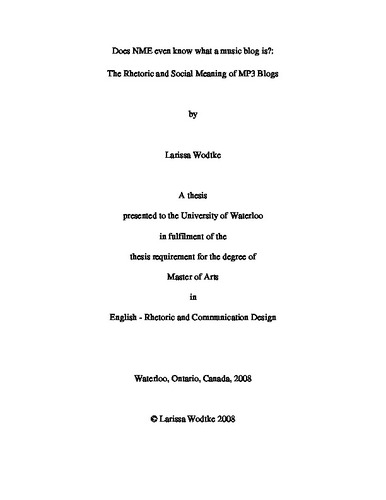 MP3 blogs and their aggregators, which have risen to prominence over the past four years, are presenting an alternative way of promoting and discovering new music. I will argue that MP3 files greatly affect MP3 blogs in terms of shaping them as: a genre separate from general weblogs and music blogs without MP3s, especially due to the impact of MP3 blog aggregators such as The Hype Machine and Elbows; a particular form of rhetoric illuminated by Kenneth Burke's dramatistic ratios of agency-purpose, purpose-act and scene-act; and as a potentially subversive subculture, which like other subcultures, exists in a symbiotic relationship with the traditional media it defines itself against. Using excerpts from multiple MP3 blogs and their forums, interviews with MP3 bloggers and Anthony Volodkin (creator of The Hype Machine), references to MP3 blogs in traditional press, and Burke's theory of dramatism and Hodge and Kress's theories of social semiotics, I will demonstrate that the MP3 file is not only changing the way music is consumed and circulated, but also the way music is promoted and discussed.