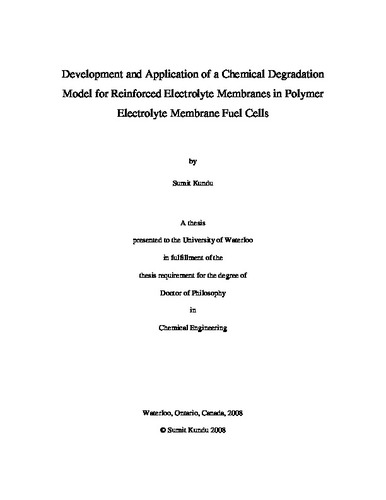 Fuel cells are electrochemical devices being developed for a variety of consumer applications including homes and vehicles. Before customers will accept this technology fuel cells must demonstrate suitable durability and reliability. One of the most important parts of a fuel cell stack is the polymer electrolyte membrane (PEM). This layer is responsible for conducting protons from anode to cathode and acting as a gas barrier, while operating in a harsh electrochemical environment. In order to develop better and more durable membranes researchers must understand the linkage between the causes of degradation, such as specific material properties and operational conditions. One significant mode of degradation of the electrolyte membrane is through chemical degradation caused by the crossover of reactant gases leading to the formation of peroxide and ultimately radical species. These radicals are able to attack vulnerable groups in the polymer structure of the membrane. The result is membrane thinning, increased gas crossover, fluoride ion release, and voltage degradation. Considerable experimental work has been done to understand these mechanisms, although there has been no attempt to model the connection between the causes of degradation and the physical effects of degradation on the electrolyte membrane. Such a model can be used as a valuable tool when evaluating different degradation mechanisms, developing stronger materials, and enable estimation of the influence of fuel cell operation and system design on degradation. This work presents the development and application of a dynamic semi-mechanistic chemical degradation model for a reinforced membrane in a polymer electrolyte membrane fuel cell. The model was developed using single cell testing with Gore™ PRIMEA® series 5510 catalyst coated membranes under open circuit voltage (OCV) conditions. Such conditions are useful for accelerated testing since they are believed to enhance chemical degradation in membranes since reactant gas partial pressures are at their maximum. It was found that the electrolyte layer closer to the cathode catalyst preferentially degraded. Furthermore, cumulative fluoride release curves for the anode and cathode began to reach plateaus at similar times. The developed model proposes that as the cathode electrolyte layer is degraded, fluoride release slows due to a lack of reactants since the inert reinforcement layer creates a barrier between the cathode and anode electrolyte layers. It is also believed that all fluoride release originates at the degradation site at the cathode. By fitting key parameters, the fluoride release trends were simulated. The proposed model links material properties such as the membrane gas permeability, membrane thickness, and membrane reactivity, as well as operating parameters such as hydrogen partial pressure and relative humidity to fluoride release, thickness change, and crossover. Further investigation into degradation at OCV operation and different relative humidity conditions showed that initial hydrogen crossover measurements were a good indicator of degradation rate over long testing times. The proposed semi-mechanistic model was able to best model the results when using a second order dependence on the hydrogen crossover term. In all cases there was some discrepancy between the model and experimental data after long times. This was attributed to the onset and contribution of anode side degradation. The effect of drawing current on fluoride release was also investigated. Experimental results showed that with increasing current density the fluoride release rate decreased. Using the developed semi-mechanistic model it was proposed that a decrease in hydrogen crossover was primarily responsible for the reduction in chemical degradation of the membrane. A macro-homogeneous model of the anode catalyst layer was used to show that a reduction in hydrogen concentration through the catalyst layer when a current is drawn is a possible reason for the reduction in degradation. Finally the model was applied to three different dynamic drive cycles. The model was able to show that over different drive cycles, the fuel cell will experience different degradation rates. Thus the developed model can be used as a potential tool to evaluate degradation in systems.