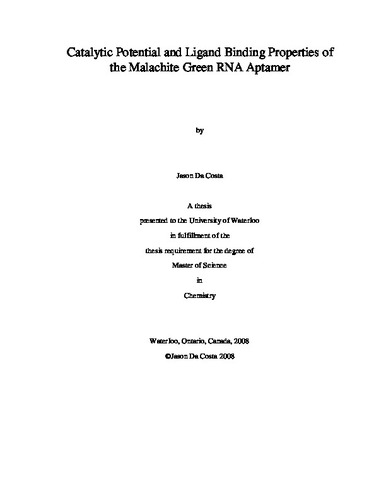 The malachite green aptamer was originally engineered for binding specificity to malachite green (MG). The environment inside the aptamer’s electronegative binding pocket was previously harnessed to catalyze an ester cleavage via the stabilization of positively charged intermediates. In order to further explore and expand the catalytic potential of this molecule we have analyzed the binding and chemical properties of MG derivatives. The catalyzed reaction rate is approximately 2000-fold faster than the non-catalyzed reaction rate. This catalytic activity demonstrates the possible significance of electrostatic forces in RNA enzymes. The ability of RNA to catalyze different reactions depending on the substrate provided would have been beneficial in an early RNA world. We have investigated the interactions between the malachite green aptamer and its ligands. This investigation contributes to a better understanding of RNA aptamer interactions with small molecules which are crucial for drug development and RNA based catalysis. Equilibrium dialysis data suggests that MG binds exclusively within the binding pocket. On the other hand, pyronin Y which lacks the third phenyl ring of MG intercalates non-specifically. This confirms that all three phenyl rings have crucial interactions with RNA bases. Isothermal calorimetry data shows a more negative enthalpy value for the binding of tetramethylrosamine (TMR) to the MG aptamer than binding of MG to the MG aptamer. This agrees with the crystal structure of TMR bound to the MG aptamer that shows more extensive base stacking interactions compared to the MG : MG aptamer complex. TMR differs from MG by the addition of an oxygen between two of its phenyl rings, that gives TMR a more planar structure. MG binding to the MG aptamer shows an entropy value increase compared to TMR binding to the MG aptamer. This agrees with available ab initio calculations which show the development of an asymmetrical charge distribution across MG when bound to the MG aptamer.