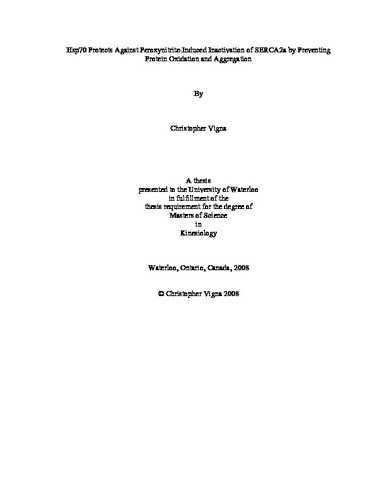 The purpose of this study was to examine the effects of exogenous peroxynitrite (ONOO-) on the cardiac isoform of the sarco(endo)plasmic reticulum Ca2+-ATPase (SERCA2a) and to determine if overexpression of heat shock protein 70 (Hsp70) could protect SERCA2a function. To characterize the interaction between SERCA2a and Hsp70, cDNAs encoding each protein were co-transfected in human embryonic kidney cells (HEK-293) using the calcium-phosphate technique. Western blotting confirmed the expression of SERCA2a and a ~1.9-fold overexpression of Hsp70 in HEK-293 cells. ONOO- was added chronically (250 μM bolus each minute for 10 minutes) to co-transfected HEK-293 cells in culture. Maximal Ca2+-ATPase activity (Vmax) was assessed on microsomal fractions isolated following exposure to ONOO-. Vmax was reduced by ~20% in HEK-293 cells transfected with SERCA2a alone (S2a-pMT2). When Hsp70 was co-transfected with SERCA2a (S2a-Hsp70), Vmax was fully protected following incubation with ONOO-. Western blot analysis showed that there were no changes in FITC binding capacity and 3-nitrotyrosine content in any of the groups. However, overexpression of Hsp70 prevented oxidation of SERCA2a, as assessed by reactive carbonyl content, following exposure to ONOO- when compared to S2a-pMT2. In addition, SERCA2a aggregation was lower compared to S2a-pMT2 groups under both control and ONOO- conditions. Co-immunoprecipitation of SERCA2a and Hsp70 confirmed that Hsp70 physically interacts with SERCA2a under all conditions. These results suggest that Hsp70 physically binds to SERCA2a and prevents oxidation and aggregation of SERCA2a, thus preserving enzyme activity.