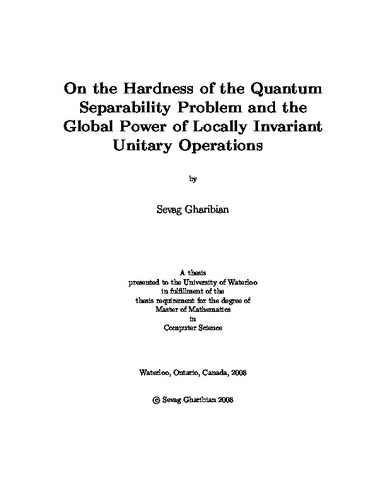 Given a bipartite density matrix ρ of a quantum state, the Quantum Separability problem (QUSEP) asks — is ρ entangled, or separable? In this thesis, we first strengthen Gurvits’ 2003 NP-hardness result for QUSEP by showing that the Weak Membership problem over the set of separable bipartite quantum states is strongly NP-hard, meaning it is NP-hard even when the error margin is as large as inverse polynomial in the dimension, i.e. is “moderately large”. Previously, this NP-hardness was known only to hold in the case of inverse exponential error. We observe the immediate implication of NP-hardness of the Weak Membership problem over the set of entanglement-breaking maps, as well as lower bounds on the maximum (Euclidean) distance possible between a bound entangled state and the separable set of quantum states (assuming P ≠ NP). We next investigate the entanglement-detecting capabilities of locally invariant unitary operations, as proposed by Fu in 2006. Denoting the subsystems of ρ as A and B, such that ρ_B = Tr_A(ρ), a locally invariant unitary operation U^B is one with the property U^B ρ_B (U^B)^† = ρ_B. We investigate the maximum shift (in Euclidean distance) inducible in ρ by applying I⊗U^B, over all locally invariant choices of U^B. We derive closed formulae for this quantity for three cases of interest: (pseudo)pure quantum states of arbitrary dimension, Werner states of arbitrary dimension, and two-qubit states. Surprisingly, similar to recent anomalies detected for non-locality measures, the first of these formulae demonstrates the existence of non-maximally entangled states attaining shifts as large as maximally entangled ones. Using the latter of these formulae, we demonstrate for certain classes of two-qubit states an equivalence between the Fu criterion and the CHSH inequality. Among other results, we investigate the ability of locally invariant unitary operations to detect bound entanglement.

Sevag Gharibian (2008). On the Hardness of the Quantum Separability Problem and the Global Power of Locally Invariant Unitary Operations. UWSpace. http://hdl.handle.net/10012/3991