The Role of Ericaceous Shrubs in the Surface Water Balance and Soil Water Availability of Cutover Peatland, Québec 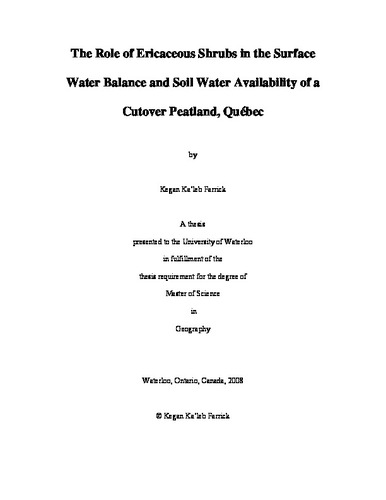 Peatlands are carbon sinks and occupy approximately 13% of Canada’s terrestrial surface of which 0.02% have been harvested for horticultural peat. The extraction of peat from natural peatlands alters the hydrology which affects the growth and survival of Sphagnum the primary peat forming vegetation. Ericaceous shrubs do not require specific water content and soil water pressure conditions for their existence and in cutover peatlands they occupy more than 70% of the surface. Rainfall interception, transpiration and root water uptake and redistribution are processes that alter water availability at the soil surface. The high abundance of shrubs at cutover peatlands will influence the surface water balance and more importantly soil water availability and, inevitably determine the success of Sphagnum reestablishment at the site. This study seeks to understand the role that ericaceous shrubs play in the surface hydrological balance at a cutover site and how these changes impact Sphagnum development. Rainfall interception, transpiration, litter layer evaporation and soil water flux was investigated in the field and lab. Approximately 334 mm of rainfall was measured over the season. The shrub canopy and litter had a maximum storage capacity of 4 and 1.2 mm respectively and intercepted ca. 36.7% (120 mm) of rainfall over the season. The effects of rainfall intensity and duration were more important than gross rainfall in determining the amount of water intercepted by the canopy, while the thickness and mass of the litter layer largely determined the storage capacity. Evapotranspiration from shrubs averaged 2.5 mm day-1 with a total of 211 mm over the season. Transpiration was 68% (142 mm) of total evapotranspiration losses, and represented the greatest water loss from the shrub canopy. From these analyses only 22% (72 mm) of rainfall is available for other soil processes and moss development. The evaporation under a litter cover is lower than bare peat and in the field represents water storage of 17 mm over the season. Reduced water input by litter interception is offset by the increased water storage under the litter. Laboratory analyses of soil water flux under ericaceous shrubs show that water loss under the shrubs was greater than bare peat. Water use under the shrubs was highest between -10 and -30 cm and was ca. 2 times greater than bare peat at the same levels. Volumetric water content (θ) decreased throughout the day and water use by shrubs during the day was twice that at night. The shrubs also maintained θ and soil water pressure (ψ) above the threshold values of 50% and -100 cm, respectively, needed for Sphagnum survival. Based on these analyses the shrubs will be beneficial to Sphagnum reestablishment and survival once the primary water losses have been compensated. I recommend raising the water table above -20 cm. In peatland restoration activities, at this level, water used between -10 and -30 cm can quickly be recharged and surface moisture maintained above threshold by capillary rise helping to offset water loss by interception and transpiration through capillary rise.