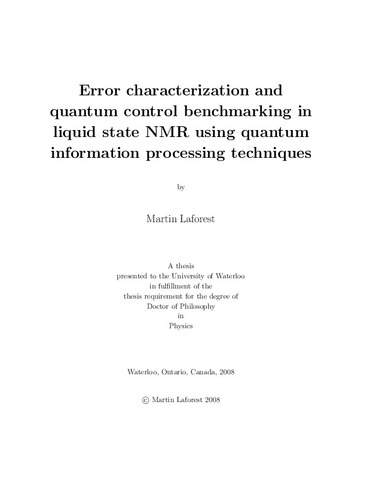 Quantum information processing has been the subject of countless discoveries since the early 1990's. It is believed to be the way of the future for computation: using quantum systems permits one to perform computation exponentially faster than on a regular classical computer. Unfortunately, quantum systems that not isolated do not behave well. They tend to lose their quantum nature due to the presence of the environment. If key information is known about the noise present in the system, methods such as quantum error correction have been developed in order to reduce the errors introduced by the environment during a given quantum computation. In order to harness the quantum world and implement the theoretical ideas of quantum information processing and quantum error correction, it is imperative to understand and quantify the noise present in the quantum processor and benchmark the quality of the control over the qubits. Usual techniques to estimate the noise or the control are based on quantum process tomography (QPT), which, unfortunately, demands an exponential amount of resources. This thesis presents work towards the characterization of noisy processes in an efficient manner. The protocols are developed from a purely abstract setting with no system-dependent variables. To circumvent the exponential nature of quantum process tomography, three different efficient protocols are proposed and experimentally verified. The first protocol uses the idea of quantum error correction to extract relevant parameters about a given noise model, namely the correlation between the dephasing of two qubits. Following that is a protocol using randomization and symmetrization to extract the probability that a given number of qubits are simultaneously corrupted in a quantum memory, regardless of the specifics of the error and which qubits are affected. Finally, a last protocol, still using randomization ideas, is developed to estimate the average fidelity per computational gates for single and multi qubit systems. Even though liquid state NMR is argued to be unsuitable for scalable quantum information processing, it remains the best test-bed system to experimentally implement, verify and develop protocols aimed at increasing the control over general quantum information processors. For this reason, all the protocols described in this thesis have been implemented in liquid state NMR, which then led to further development of control and analysis techniques.