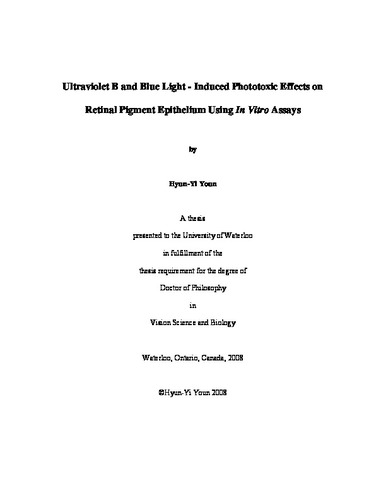 It is well known that ultraviolet (UV) B (280-315 nm) and blue light (400-500 nm) radiation can produce phototoxic lesions in the neural retina and the retinal pigment epithelium (RPE). In the first section of this thesis, bovine lens cells (epithelium and superficial cortical fibre cell) and human retinal pigment epithelial (ARPE-19) cells were used to characterize in vitro changes following oxidative stress with UVB radiation in ocular lens optics and cellular function in terms of mitochondrial dynamics. In the second part, human retinal pigment epithelial (ARPE-19) cells and in vitro bioassays were used together to develop an in vitro approach for UV radiation-induced retinal toxicology research. In the third chapter, the in vitro approach developed above was used with intraocular lens (IOL) materials to evaluate the UV radiation blocking efficiency of commercially available IOL’s. Lastly, narrowband blue light irradiation and in vitro assays were used to determine more precisely the wavelengths of blue light responsible for photochemical lesions of the retina as an effort to contribute to future IOL designs. The results from mitochondrial dynamics of lens cells and RPE cells show significant decreases in mitochondrial movement after UVB irradiation in a dose dependent manner. Results obtained from four in vitro assays (Alamar blue assay, confocal microscopy for mitochondrial distribution and nucleic acids damage, phagocytotic activity assay) for evaluating the UVB-induced damage in ARPE-19 show significant decreases in cell viability as well as phagocytotic activity of RPE cells after UVB radiation. In addition, the results show that UV radiation can also induce the degradation of DNA/RNA and mitochondria of RPE cells in a dose dependent manner. The results of the UV blocking efficiency test of commercially available IOL materials show very effective UV blocking ability, allowing no cellular damage at all, in comparison to an IOL uncovered control cell. The results of three different wavelengths of blue light exposure show that only 400 nm blue light radiation can cause significant damage to RPE cells, while 420 and 435.8 nm blue light radiation cause no cellular damage at all. In conclusion, UVB and blue light radiation can cause phototoxic damage to the retinal pigment epithelium as a result of oxidative stress, and in vitro bioassays used for this research may offer a sensitive, and meaningful biomarker approach, not only for evaluating RPE function after oxidative and chemical stress, but also for evaluating IOL effectiveness.