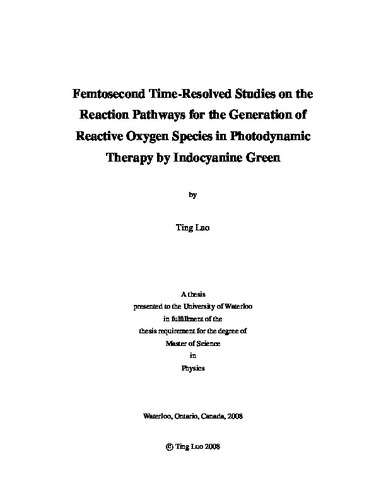 Photodynamic therapy (PDT), which utilizes the combination of light and a photosensitizing drug to cause tissue damages, has emerged as a novel clinical approach for the treatment of numerous cancers, as well as some other non-malignant conditions. Although a few photosensitizers have been approved for clinical uses, the mechanism of drug action, especially the initial photochemical reactions that lead to the formation of the reactive oxygen species (ROS), is still not well understood. Moreover, the PDT efficiency of currently used drugs is limited due to the strong attenuation of light by tissues in the wavelength range of 630-690 nm, where these drugs are photo-activated. Photosensitizers which are sensitive to near infrared (NIR) light are believed to be able to overcome this limitation. In this thesis work, the molecular mechanism of action of indocyanine green (ICG), a potential NIR PDT drug, was investigated using our femtosecond time-resolved laser spectroscopy. Femtosecond time-resolved fluorescence decay profiles of ICG in water were obtained using the fluorescence up-conversion technique. The lifetime of ICG excited singlet state was determined to be about 150 ps, directly from the fluorescence decay kinetic traces. The excited triplet-state yield of ICG in water was found to be extremely low, according to the result of the ground-state bleaching recovery measurement. This observation is contrary to the conventional understanding that the ROS would be generated mainly from the excited triplet state of the photosensitizer and, therefore, suggests the existence of a new reaction pathway. Pump-probe transient absorption spectroscopy was applied to study the reaction between ICG and oxygen in more details. The results reveal that the formation of ICG and oxygen ground-state complexes ([ICG]<sub>m</sub>:[O<sub>2</sub>]<sub>n</sub>) is a key step in the generation of the ROS. Electron transfer from the excited singlet state of ICG to oxygen has been proposed to be a possible pathway for the generation of ROS.