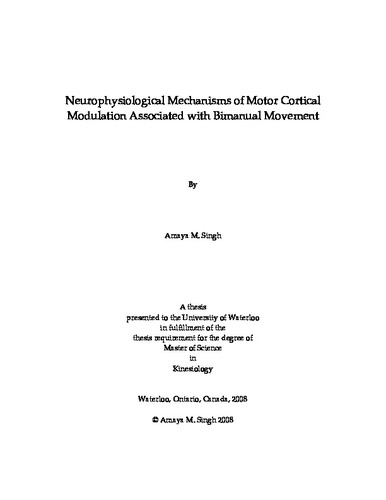 The neural correlates of bilateral upper limb movement are poorly understood. It has been proposed that interhemispheric pathways contribute to the modulation of motor cortical excitability during bimanual movements, possibly via direct connections between primary motor areas (M1), or via a central cortical structure, such as the supplementary motor area (SMA). The ability of one hemisphere to facilitate activation in the other presents a unique opportunity for motor rehabilitation programs using bilateral movements. The focus of this thesis was to investigate the mechanisms underlying bimanual movements in a group of healthy control participants using functional magnetic resonance imaging (fMRI), and subsequently to identify the types of movements that are most likely to maximize M1 activity. It was hypothesized first, that movements involving more proximal muscles, which are known to have a greater number of transcallosal connections, would produce a larger facilitation of M1 activity; and secondly, that the greatest facilitation would occur during those phases of movements where homologous muscles are active simultaneously (i.e. in-phase bilateral movements). The current results demonstrate that the M1 regions and the SMA work together to modulate motor cortical excitability, and that the greatest modulation of activity is seen during movements involving proximal muscles. The findings presented may have clinical relevance to motor rehabilitation programs involving bilateral movements.