From Bayonets to Stilettos to UN Resolutions: The Development of Howard Green’s Views Regarding War 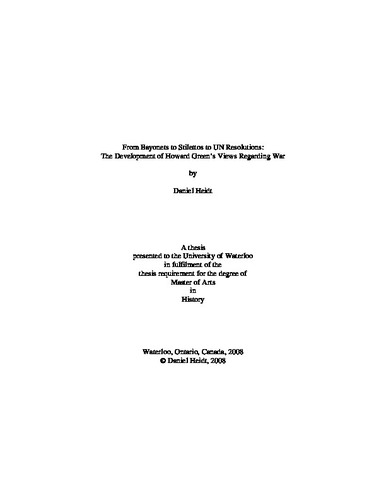 This thesis follows the development of Howard Charles Green’s (1895-1989) views on war and disarmament as both a private citizen and as a Member of Parliament. It draws its conclusions from a large archival base. Beginning with Green’s experiences in the First World War, this thesis charts Green’s views on war through to the United Nations Irish Resolution on disarmament of December 20, 1960. Contrary to current historiography examining the Diefenbaker period, it proves that Green’s beliefs about war only changed after his appointment as Secretary of State for External Affairs in June 1959, and even then it took time for his new ideals to “harden.” Prior to his “conversion” he believed that war remained a viable aspect of foreign policy and often encouraged its fuller prosecution.

Daniel Heidt (2008). From Bayonets to Stilettos to UN Resolutions: The Development of Howard Green’s Views Regarding War. UWSpace. http://hdl.handle.net/10012/3959